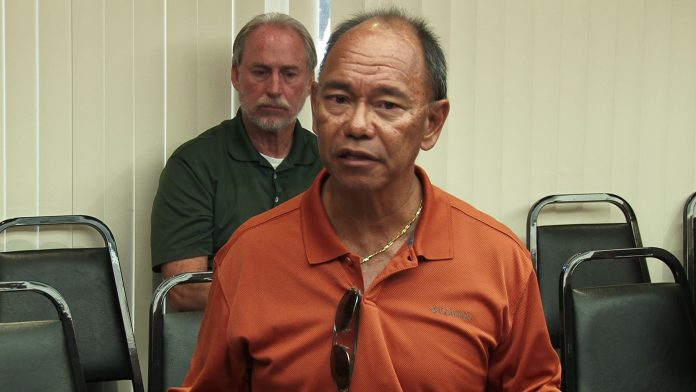 Simon Sanchez made his presentation to the Guam Solid Waste Authority board of directors.

Guam – CCU Commissioner Simon Sanchez is once again taking aim at solid waste federal receivers Gershman Brickner and Bratton, making a case for how the receivers financing plan for post-closure care for Ordot Dump will only hurt ratepayers in the end.

Simon Sanchez is a CCU Commissioner but today he went before the Guam Solid Waste Authority board as a ratepayer to present his interpretation of two different sets of financing plans that the island will have to spend for post-closure care of Ordot Dump.

One is a financing plan proposed by the government of Guam, the other is by federal receivers Gershman Brickner and Bratton. Both will cost ratepayers $42 million. Sanchez says at the end of Fiscal Year 2015, GovGuam was left with about $8.7 million to spend. This is Sanchez’s interpretation of GBB’s plan

“You start at $8.7 million at the end of FY 15. This fiscal year, according to the receiver’s plan, you’re hoping to draw down $4.7 million and $2 million dollars–$2 million for the Ordot closure and $4.7 for half of the cost of the other projects. You take that out of your $8.7 million but you’re also generating another $4.5 million and their plan iterates this through the next seven or eight years,” Sanchez explains.

Sanchez says, basically, GBB’s plan takes the entire $4.5 million that’s being generated now and uses all of it over the next eight years to fund the $42 million. Then based on this equation, Sanchez says the money comes “dangerously close” to running out by Fiscal Year 2022.

Although some might wonder why he questions GBB’s accuracy in projecting future costs, Sanchez says GBB has a history of miscalculating how much they need to spend on these projects. He says GBB’s projection for the Layon Landfill was too high and for closure of Ordot Dump it was too low.

“What I did was I took their average. I call it the “boo boo” rate. The difference between what they thought it would cost and what it actually cost. And if you take just the average, ignoring whether it’s plus or minus, their average for these projects from their own filings was off by an average of 59 percent. So what happens if the $42 million is off by 59 percent when you get to FY 21 and 22 under the GBB plan, you’re not gonna have the money,” he argues.

Sanchez also criticizes GBB’s proposal because it does not give ratepayers any flexibility.

“The general rule is if you benefit from this cost then you should help pay for this cost. The GBB plan say that, well even though the benefits of Ordot are gonna last 20 or 30 years, I just want the next 8 years of ratepayers to pay for it. It’s kinda like our kids coming in and saying, ‘Hey, mom and dad, I know you have a 30 year mortgage but can you pay off the house in 10 years so I can have it for free?’ In rate setting philosophy, if you’re gonna beneit then you should help pay for it,” says Sanchez.

The next solid waste hearing in the District Court of Guam is scheduled for March 29 at 8:30 am.