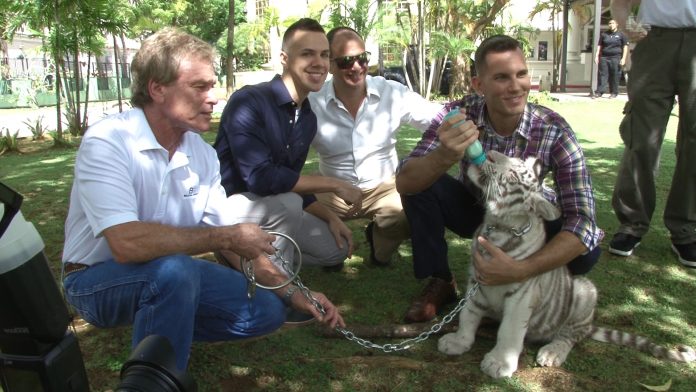 Headlining the show are Master Illusionists Chris and Ryan Zubrick and two Bengal tiger cubs, Takara and Caesar. The show, titled ZUBRICK, is also named after the master illusionists.

Guam – Did you know that the Sandcastle has been on Guam for 25 years? To celebrate those 25 years, the Sandcastle will be introducing its fifth production next April and this time it will be bigger and better than ever.

“I’m very proud to announce that we are now embarking upon our 5th and largest production that we’ve done here and it will be focused primarily on grand illusion and magic on a scale that I don’t think has been done anywhere in Asia, to be honest. It will also have our dancers and some variety elements, some comedy and some dancing, of course, as well. The new show is called Zubrick and that show is named after our star illusionists, Chris and Ryan Zubrick,” announced Sandcastle President Mark Baldyga.

Chris and Ryan Zubrick have been touring all over the US and Asia but have now made Guam their home. The show Zubrick does not debut until April next year, but in the meantime, they’re busy training and rehearsing for the show. Just a few of their co-stars will be bengal tigers, one of whom we got to meet. Her name is Takara.

“She’s four months. I think she weighs about 30 pounds,” said one of Takara’s trainers, Brian Crawley, adding that Takara, when fully grown, will weigh about 300 pounds.

Master illusionist Chris Zubrick tells us what we can expect from the much anticipated show.

“It’s unrivaled. The show, the new show, is gonna be great. It’s gonna be unlike anything you’ve ever seen. Mr. Baldyga spared no expense in putting together our production team. We’re working with an illusion builder out of Vegas. He’s actually working on some illusions for David Copperfield, so that kind of tells you the scale of the magic and illusions that we’re gonna bring to Guam,” said Chris Zubrick.

Again, Zubrick will debut in April next year. What that means is this is your last chance to catch Dream, which will end in April. Sandcastle is also currently offering 50 percent off Dream show tickets through the holidays.

Read the press release from the Sandcastle below:

(November 5, 2015 –Tumon, Guam) As part of its upcoming 25th anniversary celebration, SandCastle will open a spectacular new show. Production is already in the works with a world class creative team that includes Chris Childers from Madonna and Cirque du Soleil and Tim Clothier, illusion designer for David Copperfield.

Starring in the show will be master Illusionists Chris and Ryan Zubrick from the United States and the two newest, and youngest cast members, Caesar and Takara who have already arrived to their new home.

Caesar is a 16 week-­‐old Orange Bengal Tiger, while Takara is a 15 week-­‐old White Bengal Tiger. Over the coming weeks, the two cubs will begin their training and rehearsals with the Zubricks, appearing in the seventh and final season of the award winning production show, Dream.

SandCastle CEO Mark Baldyga said, “Caesar and Takara will grow nearly one pound per day, so don’t miss your chance to visit them in Dream as cubs. You can literally watch their transformation to nearly fully-­‐grown tigers by the opening of the new show on April 1, 2016.

”Baldyga said, “We felt that with our 25th anniversary in December of this year it was important to make some changes, to step things up a few levels and to bring in world class illusionists to match the caliber of the facility and the new show. The Zubricks are the finest illusionists I have seen on our stage. The new show will be titled “Zubrick” and will feature grand illusion on a level never before seen on Guam. As Guam’s only professional theatrical facility, we are extremely proud to present the Zubricks, Caesar and Takara at the one and only SandCastle. We thank everyone for their support these last 25 years and we look forward to another 25 years of bringing  you  world-­‐class entertainment.”