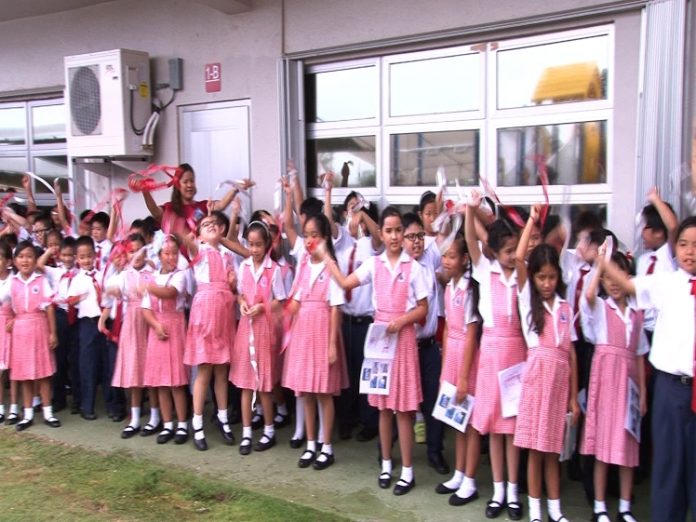 The Santa Barbara Catholic School is expanding not only their campus, but their STEM program as well.

Guam – The Santa Barbara Catholic School now has a new facility adding more classrooms to their campus. But these are not just ordinary classrooms, they’re going to be the center of the school’s Science Technology Engineering and Math program.

It took six months to build and it’s finally completed. From the front of the Dededo campus, it looks like a tower. This is the new Ysrael building.

SBCS Asst. Principal Sister Maria Rosario says, “The new facility was donated by Alfred Ysrael and it houses two classrooms. Down here is the science lab and upstairs we have the new computer lab.”
Some of the students even shared what they know about the new equipment.
SBCS 8th Grader Andrea Santos explains, “This is a force table. It will be balanced if it’s in the middle. It’s not in the middle because there’s different amount of weights. This is heavier so it’s moving towards my side. If you want to find different measures of balance.”
SBCS 8th Grader Ron Coloma says, “This material represents the different wave length and this represents the amplitude and the crest and the trough. In a transverse wave, the highest part of the wave is called a crest and the lowest part is a trough. When we spin this, it measures the distance of the wavelengths.”
Rosario says prior to the expansion, the school already had a computer room and a science lab, but she says this new addition is an upgrade and will definitely enhance their STEM programs. She says, “Because of the addition of this building, we are looking forward to enhancing our curriculum. We want it to be more rigorous so that we can prepare our students educationally in terms of their contribution to society so we want to make them better equipped for the future in terms of science and technology. We are excited because now we have the equipment and the enhancements in our curriculum that we need.”