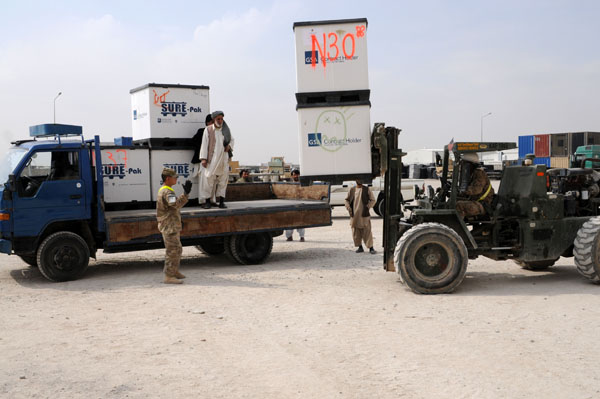 Soldiers of the 418th Medical Logistics Company, attached to the 82nd SB-CMRE, sorted, accounted for, processed, inventoried and loaded nearly 80 tri-wall boxes filled with more than $700,000 worth of medical equipment which is being conferred to Kandahar Ministry of Public Health officials through the Foreign Excess Personal Property (FEPP) program.

418th Med. Log. Co. troops used a forklift to place the supplies which include needles, surgical gowns and masks, among many other items, onto trucks for the Afghans.

“Today, we’re doing an inventory of all the materials and a portion of it is being picked up now [by the Afghans] with the rest being contracted for shipment at a later date,” said Woodland Park, Colo. native, Maj. James Schmid, Afghan National Security Forces medical development chief for CJTF-4. “The Afghans will be able to equip all clinics and level III hospitals in the [Kandahar] region. These were excess supplies and it’s good to see that we’re not wasting tax payer money by disposing of it. It’s another opportunity for us to build relations and help the Afghans stand on their own.”

“This is a great opportunity as these supplies may have just stayed here and expired, so I’m glad it’s going to good use,” said Fayetteville, N.C., native, 1st Lt. Jaime Daniels, brigade medical planner, 82nd SB-CMRE. “It was a priority for us to do this as we know it will be beneficial for the Afghans and help them to become more self sufficient.”

As locations down-size through on-going deconstruction projects in Afghanistan, teams at the retrosort yards, to include those who process Class VIII (medical supplies and equipment) work to ensure useable items from the bases get returned to the U.S. military inventory either in theater and elsewhere or are given to Afghans through programs such as FEPP. In some cases where the cost to ship excess items is more than the worth of the items, they may be disposed of, especially if no one steps up to claim them.

“Fortunately the Afghans wanted the items and we were able to FEPP the supplies to them,” said Corpus Christi native, Sgt. 1st Class John Allen, a bio-medical equipment specialist, attached to the 82nd SB-CMRE, who oversees medical retrosort operations. “It’s satisfying at the end of the day to know everything was saved.”

“This has gone much better than expected and it’s something we’ve been planning for a long time,” added Allen. “It’s one of the biggest projects we’ve done since our rotation.”

Dr. Abdulqayoum Pokhla, director for Afghanistan’s Kandahar Ministry of Public Health, coordinated with the 82nd SB-CMRE and CJTF-4 for the supplies and will be using them to re-stock 46 clinics throughout the Kandahar region.

“We have received some supplies in the past, but not in such a large quantity before,” said Pokhla with a smile. “We’re absolutely happy and very thankful about this as not only does our medical mission benefit but our civilians and our health facilities benefit.”

“Surgical kits, I.V. [intra-venous] fluids and band aids are all dearly needed in our health facilities,” added Pokhla. “We have many of these things but we don’t have a [surplus]. With the support of the U.S., we can use these things at the health facility levels and for emergency situations, so receiving the supplies has great significance to us.”

With Afghanistan’s successful transition to overseeing its own security, Pokhla said he is optimistic about his country’s efforts toward stability and the next generation of health care in Afghanistan.

“We have made good progress and there are still many areas where the health sector needs to improve, but with support from the international community, I do see positive trends in Afghanistan for the future,” concluded Pokhla.