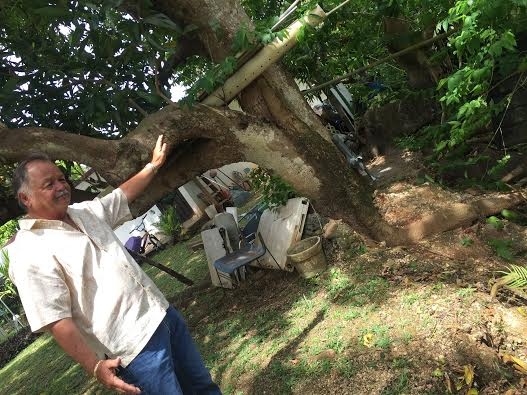 Guam – While property owners along the Talofofo and Ugum rivers have been asking GovGuam to look at ways to mitigate erosion along the banks of their river, residents of Santa Rita are losing real estate due to river erosion.

The legislature has held a series of public hearings on erosion along the banks of the Talofofo and Ugum rivers. At the last hearing Santa Rita mayor Dale Alvarez said erosion along the banks of the Namo river is endangering the homes of village residents. “Well I gotta lot of big problems with erosion especially when it really really rains hard. Looks like I’m losing a lot of real estate and my constituents are concerned of course because we already lost one house due to erosion,” said Mayor Alvarez.

Now the mayor is concerned he may lose three more houses. the Diaz household here says water runoff from the road and erosion from the culvert next to their house has eaten away 8 to 10 feet of property. “Even the Governor came down directed the former director to find a solution and fix it as soon as possible,” said Mayor Alvarez.

Both the former director and current director Glenn Leon Guerrero said that they can’t spend government money and use government resources to fix private property.

Meanwhile another property owner further upstream is also losing land fast. “I concerned of my house because my wife is disabled and also my property because this is the only property I got here on Guam. So I want to save it. That is the reason why I ask the government for help is if they can help us,” said Justo Sotomil Jr. Sotomil has lived here for over 40 years. He says the river never swelled this much before. He says he only noticed an increase in river overflow and erosion of the river banks into his back yard after major developments were built upstream.

“It getting worse when they got destruction from on top of the mountain there it’s getting worse because of the flow I think the pressure has become stronger because of the water coming from the mountain.” Sotomil is referring to a housing area built in Apra heights called Buena Vista. The impact of developments on storm water runoff and river erosion is ultimately something that the government is supposed to oversee.

During the last public hearing on Southern erosion Senator Rory Respicio said he would be introducing a bill to create a southern river erosion council to come up with a master plan to deal with the ongoing erosion of southern rivers. This master plan is then supposed to be incorporated into the southern development master plan.