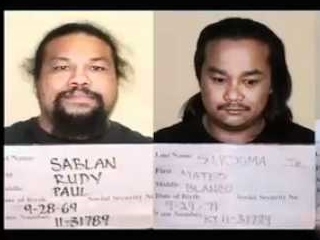 Mateo Sardoma Jr. and Rudy PH Sablan receive a sentence of 11 years each for their role in the one of the island’s biggest drug trafficking cases.

Guam – After nearly three years since their arrest and one of the biggest drug busts in years, Drug Kingpin Mateo Sardoma Jr has been sentenced to 11 years in prison. His right hand man, Rudy Sablan, also received 11 years in federal prison.

Sardoma, along with about 9 others, pleaded guilty in the drug trafficking case, but not before the case went to trial. Sardoma, Sablan, and Sardoma’s girlfriend, Maria Cristina Edrosa, were all found guilty of drug conspiracy charges.

Sardoma and Sablan received the maximum sentence under their plea agreements of 11 years; 10 years for felony possession of a firearm and 1 year for possession of methamphetamine.

However, they will likely only serve about 8 more years since they will get credit for time served. The two were also ordered to pay $18,000 in restitution.

They were initially facing up to life in prison, but took last minute plea deals for reduced sentences. The case involved over 10 pounds of smuggled ice worth over $2 million.