Guam – A Toyota Sedan on its way up the Route 4 hill to Sinajana spun out of control during heavy rain Wednesday afternoon. It slid over into the oncoming lane and struke a school bus coming down the hill

There were 12 students from Father Duenas aboard the school bus. None of them was injured and they were all transported to another bus.

The front left end of the school bus suffered some damage, however the Toyota sedan suffered heavy damage along it left side where it collided with the school bus. Air bags could be seen deployed inside the vehicle.

The 24 year old woman driving the sedan was fitted with a neck brace and taken out of  the vehicle on a stretcher. She was taken to GMH where she was reported to be in stable condition late Wednesday afternoon. 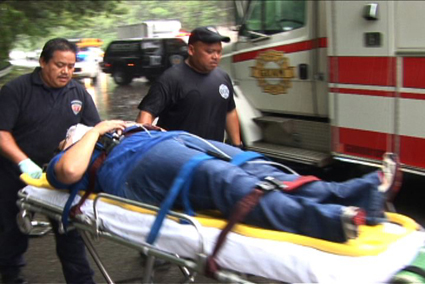