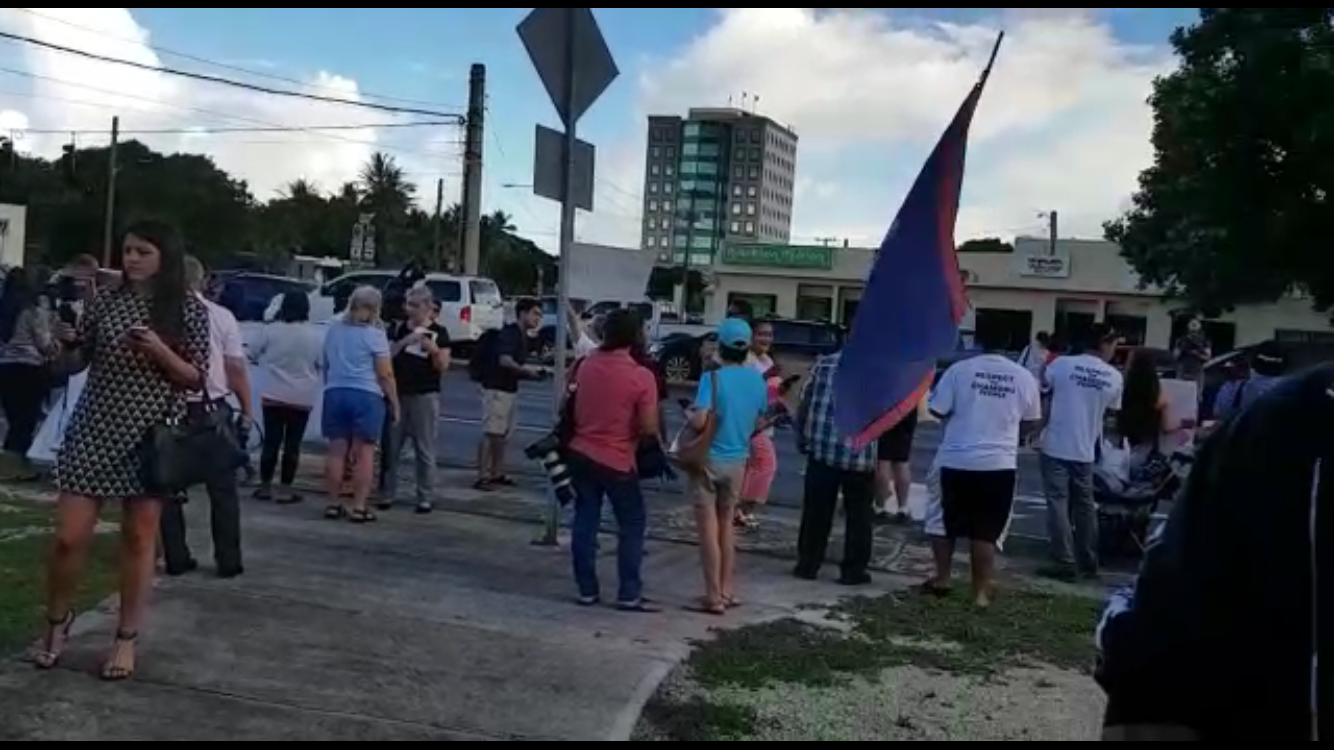 Guam – In response to the dangerous talks of war between the U.S. and North Korea and with Guam caught in the crosshairs, two organizations are holding a peace rally at the Chief Kepuha loop in Hagatna.

The rally was organized by two community groups, Independent Guåhan and the Prutehi Litekyan/Save Ritidian. At the rally, several dozen showed up with signs that read, “WAR Birds Drop BOMBS! Native Birds Sing SONGS!” and “When the power of love overcomes the love of power, the world will be at peace.”

People for Peace Rally organizer and Spokesperson for Independent Guåhan Kenneth Gofigan Kuper spoke of the message they want to send the world.

“Unfortunately, we’re kind of acting like ground zero. So we think it’s an important message that it comes from us here on this island that we express that we want peace,” said Kuper.

You can view more footage of the event on our PNC Facebook page. http://www.facebook.com/pncguam

You can also read the release from People for Peace Rally below:

Hagåtña, Guåhan — In a call for peace amid dangerous talks of war, two Guam community groups are organizing a “People for Peace” rally at the Maga’låhi Kepuha loop in Hagåtña on Monday, August 14, 2017 at 5 p.m.Independent Guåhan and the Prutehi Litekyan/Save Ritidian organization are inviting the local community to join them with peaceful signs and positive messages they’d like to share with the world.

This past week, U.S. President Donald Trump and North Korean Leader Kim Jong-un exchanged aggressive threats of attack that included plans for a North Korean missile strike near Guam in mid-August. Historically, Guam has been forced in the middle of other nations’ conflicts, particularly as an unincorporated territory of the United States. As a result, many of Guam’s people know the painful and horrific effects of war as World II survivors and as veterans. Thus, the members of Independent Guåhan and Prutehi Litekyan, both organizations dedicated to the decolonization and demilitarization of Guam, feel it is imperative for the community to stand together in a call for peace.

“What’s happening in Guam is a global issue, because if our island is attacked, it could be the catalyst for a global catastrophe,” says Independent Guåhan spokesperson Kenneth Gofigan Kuper. “Peace on Guam means peace for the rest of the world.”

“The trajectory of US hyper-militarization of Guam and the ‘Pacific’ Ocean has largely gone unnoticed and is greatly responsible for the destabilization of our region. The world’s attention must be focused on demilitarizing our lands that includes immediately halting the construction, which can take place in a matter of days, of a live-fire training range complex near Ritidian, a sacred place where we can connect to our ancestors and the location of the Guam Wildlife Refuge established on stolen native lands.”

Independent Guåhan empowers the Chamoru people to reclaim our sovereignty as a nation. Inspired by the strength of our ancestors and with love for future generations, we educate and unify all who call our island home to build a sustainable and prosperous independent future.

Prutehi Litekyan: Save Ritidian, a direct action group dedicated to the protection of natural and cultural resources in all sites identified for DOD live-fire training on Guam, opposes the establishment of any military firing range, stands in solidarity with Guardians of Gani’, PaganWatch, Tinian Women’s Association, and Alternative Zero Coalition by preventing environmental degradation and destruction on sacred and native lands, and promotes the continued pursuit for return of ancestral lands.