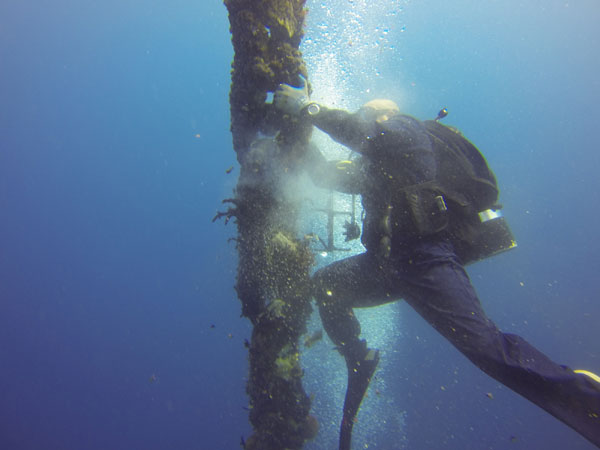 Apra Harbor, Guam – Daily rain squalls, howling winds, intense heat and crystal-clear water. These were some of the conditions encountered by Underwater Construction Team Two’s Construction Diving Detachment Charlie (CDD/C) during the second stop of a six-month deployment in the PACOM AOR.

Arriving via C-130 cargo transport 10 members of CDD/C hit the ground running. With no time to spare and half of their required gear still awaiting transport in Diego Garcia, they made the long journey from Andersen Air Force Base to Apra Harbor. Their task: complete inspections and routine maintenance of 20 fleet mooring buoys, conduct Rapid Penetration Tests at four new mooring sites and perform four bathymetric surveys.

A typical Level I inspection consists of routine “swim by” to identify any obvious damage or defects. This is followed by collecting detailed measurements of all components and attaching hardware. Using calipers and specialized measuring devices called Go-no-Go gauges divers were able to collect vital data to ensure that all moorings are within standards to support fleet operations for the region.

After two weeks of diving and working with less than half of the equipment they deployed with, the second plane from Diego Garcia finally arrived.

With all diving assets and personnel in Guam UCT divers transitioned from using SCUBA to their Surface Supplied Diving System (SSDS). Using a vessel of opportunity large enough to support SSDS, divers outfitted the craft to support diving at depths up to 170 feet of sea water (FSW). This was no easy task. This required coordination between multiple tenant commands to load over 15,000 pounds of diving and support equipment in order to conduct deep dives that required extensive decompression.

In order to limit the amount of in-water decompression, divers utilized a Transportable Recompression Chamber System (TRCS) to conduct Surface-Decompression dives (SUR-D). Instead of decompressing in the water on 100 percent oxygen divers surfaced after completing all in-water stops at 40 FSW and deeper to spend time at 50 and 40 FSW in the recompression chamber. This mode of decompression gives the diving supervisor greater control in the event a diver develops symptoms of decompression sickness (DCS) or oxygen toxicity.

Although the water in Guam is warm and for the most part crystal clear, when working underwater hydraulics all expectations go out the door. Shifting to the inner harbor following mooring inspections, divers re-configured the diving platform to support the mission of collecting geo-technical survey data using rapid penetration tests. This entailed the use of an underwater hydraulic breaker weighing in at over 60 pounds, and all support equipment to make it work.

Getting the diving craft in two-point moor was the first time-consuming task. In order to get accurate information divers had to be within 50 feet of a pre-determined location, with heavy winds and a large boat this was not easy. Constant communication and hundreds of feet of mooring line later divers were able to “go to work.”

What seemed like an easy task turned in to over four hours of bottom time at 40 FSW. Once divers hit the bottom they immediately sank in mud/silt sometimes extending up their chest.

“It’s like working in quick sand, with a blind-fold on,” said UT2 (SCW/DV) Erick Martin.

Working completely by touch divers had to use the BR-67 (hydraulic breaker) to drive 2 foot steel rods. Topside personnel annotated how long it would take to drive each rod. After each rod divers used a foot/pound torque wrench to record readings. At all four locations divers drove 40 feet of steel rod in to the ocean floor.

The last task the Seabee divers had to complete was the inspection of mooring chains on the floating mooring dubbed “Big Blue.”

With only one day to complete the task the project supervisor Builder 2nd Class (SCW/DV) Joshua Knolla had to formulate a plan to simultaneously unload the SSDS dive boat and complete the inspection of over 25 mooring chains on “Big Blue.”

With rotating crews diving SCUBA up to 70 FSW divers were able to get all necessary inspection data.

“This was no easy task,” said Knolla. “We had guys unloading the SSDS boat and packing gear for our next flight, and a full crew of guys diving.”

At the end of the day divers from CDD/C completed all required tasking including the last minute inspection of “Big Blue.” They overcame adverse weather conditions to safely finish the project early and under budget.

“These guys are true professionals,” said Lt. Nick Brown, the engineer in charge from Naval Facilities Expeditionary Warfare Center (NAVFAC EXWC). “The amount of diving accomplished in the short time allotted was impressive, these guys truly embody the ‘can do’ spirit of the Seabees, with the added motivation of being deep-sea divers.”

UCT TWO was in Guam on their second of seven stops spanning six countries during their deployment across Pacific Fleet. They’ll be conducting inspection, maintenance and repair of various underwater and waterfront facilities along with participation in four PACFLT exercises during their six-month PACOM deployment.