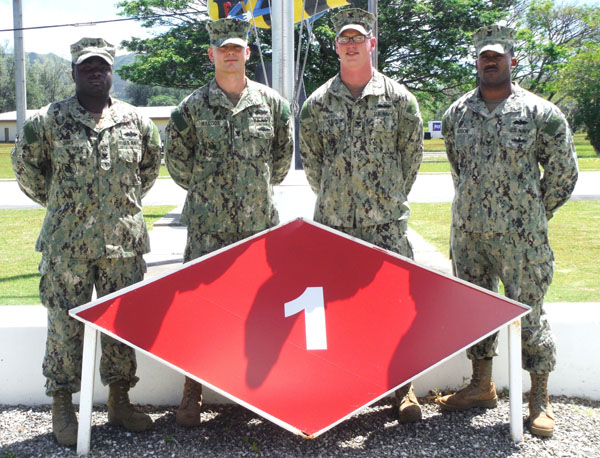 The Sailors, who were driving back from a jobsite, witnessed the accident and rendered first aid to one of the injured Sailors.

“During a stop, which seemed like a routine red light, I noticed smoke, a car flipped over, and another white car that was smashed up and emitting fumes into the air approximately four cars ahead of our truck,” said Builder 3rd Class Eric Millisor, NMCB 1. “Without thinking, I just hopped out and told the guys in the car that we should go see if these guys need help. I ran to the scene and noticed two passengers crawling out of the flipped over vehicle.”

Millisor said that one of the victims was responsive, but couldn’t get out, so he helped him out of the vehicle and moved him to the sidewalk away from the four-lane road.

“I checked for airway breathing and circulation on the third passenger and he was responsive in all areas. I began scanning for cuts up and down the body. I also assessed for glass and life-threatening injuries.”

[Seabees from Naval Mobile Construction Battalion (NMCB) 1 served as first responders to a vehicle accident involving three sailors from Los Angeles-class fast-attack submarine USS North Carolina (SSN 777) March 18. The sailors, who were driving back from a job site, witnessed the accident and rendered first aid to one of the injured sailors and transported two of three victims to nearby USNH Guam. (U.S. Navy photo by Builder 3rd Class Jennifer Cruz)]

According to Sims, when the sailors arrived to the accident site, there we about 20 people there, who seemed unsure of how to aid the injured submariners, but the NMCB 1 personnel, who receive combat lifesaver training, quickly went into action until an ambulance arrived on the scene.

“Bystanders had removed one victim from the car and placed him into the street, but Petty Officer Millisor quickly assessed the situation and moved the victim to the sidewalk out of dangerous traffic,” said Watson.

While Millisor performed first aid on the injured victim, Watson wrote down pertinent information about the patient, such as his name, his ship and the time of the accident.

“I helped direct the flow of traffic because the ambulance and fire department were trying to get through the traffic jam surrounding the accident scene,” said Sims. “We treated the victim for shock by talking to him and by also making sure the other sailors were OK.”

The Seabees stayed with the accident victims until the EMTs, police and fire department came, and drove two of the three victims to the U.S. Naval Hospital Guam and assisted in contacting their chain of command.

“BU2 Watson and myself started talking with the two passengers of the vehicle. This is when we found out the three people in the car were sailors from the USS North Carolina,” said Smith. “BU2 Watson started taking notes so we could contact the chain of command (COC) at the USS North Carolina. I then contacted the NMCB 1 chain of command to inform them what had happened and that we were going to transport the two less-critical sailors to the hospital while the ambulance took the critical patient to Naval Hospital Guam.”

The trio’s chain of command applauded the group’s efforts in aiding the injured sailors, attributing their ability to effectively help the injured motorists to the combat lifesaving skills every Seabee receives throughout their career.

“We are constantly required to complete training for first aid, but never know when we will be called to use it. Today, these four sailors were able to recall their training and assist brothers in arms with their selfless acts of heroism,” said Chief Builder Mary Montigny, NMCB 1 Detail Guam platoon leading chief petty officer. “Bravo Zulu!”

NMCB 1 provides combat-ready engineer forces in response to Combatant Commander and Naval Component Commander requirements and provides planning and operational support for Seabee employment. The continued operations in the Pacific Command help demonstrate the U.S. commitment to developing enduring relationships, and strengthening local institutions and communities throughout the region. At U.S. locations, Seabees will perform missions to prepare for disaster support and civic assistance missions. NMCB 1 is home-ported out of Gulfport, Miss., and has 13 global details deployed throughout the United States and Pacific area of operations in Japan, Korea, Diego Garcia, Cambodia, Philippines, Timor-Leste and Guam.