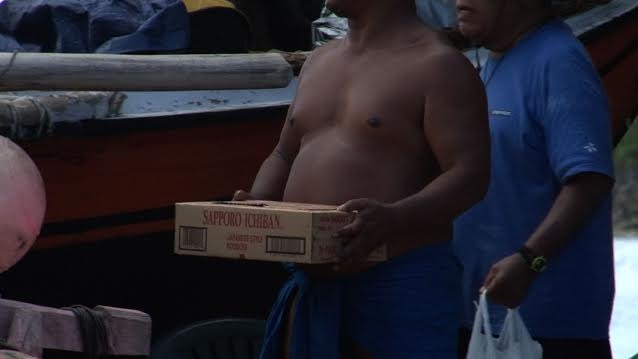 Governor’s Spokeswoman Oyoal Ngiririkl says no one informed the FESTPAC committee that the delegates were still here.

Guam – Traditional seafarers who are still on Guam and staying at the Paseo next to their canoes are not being provided transportation, food or even water.

These delegates from the FSM sailed on traditional canoes across hundreds of miles of open ocean to Guam for FESTPAC. GovGuam did not even need to provide them any housing as they stayed near their canoes under a traditional hut and some canopies.

At least 20 of these delegates remain on Guam. Two canoes from Polowat and one canoe from Houk, Chuuk will sail home Thursday.

However Master Navigator Mario Benito who didn’t want to speak on camera did tell PNC that after the closing ceremonies on Saturday they stopped getting fed. In fact GovGuam stopped providing them with water.

Benito says he was really happy to participate in the Festival of the Pacific Arts and was proud to sail into Guam. Now all he is asking is that they be provided with some provisions before they depart on their traditional canoes back to their islands in Chuuk.

According to the Governor’s Spokeswoman Oyoal Ngiririkl the seafarers meals were scheduled to end on Sunday. She says no one communicated to the FESTPAC committee that the seafarers would be staying past Sunday. She says that if they had known that they were still here they would have continued to feed them. Ngiririkl says that they will be fed dinner tonight (Weds.) and breakfast tomorrow(Thurs.).