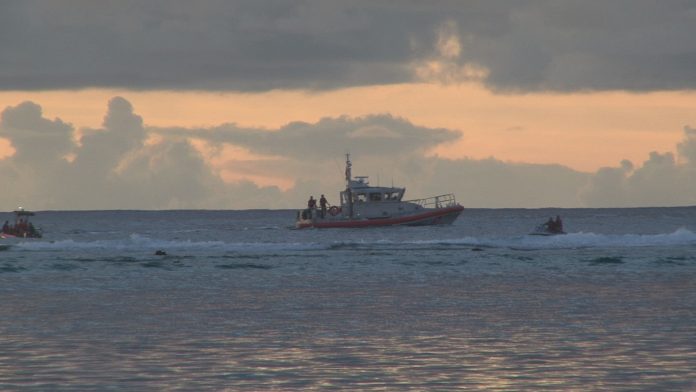 The man was swimming with a group of five Sunday afternoon in waters behind the Dusit Thani Hotel.

Guam – Search efforts continued today for a missing swimmer off of Tumon Bay. The man was with a group of five when they ran into some trouble yesterday afternoon. Four made it back to shore. One man, a US Marine, did not.

The Guam Fire Department set up their command post at the Matapang Beach in Tumon as search efforts continued for a missing US Marine in waters off of Tumon Bay. The US Coast Guard, The US Marines, the Guam Police Department and the US Navy’s HSC-25 were also part of the search and rescue efforts as well.

“The description we have is a 22-year-old caucasian male last seen wearing only gray shorts. No flotation devices. Basically he was with a party of five that were swimming in or around the channel here in Tumon on the north side just outside of Dusit Thani. They just got swept out or got into a little trouble with the current, got swept out. Four made it back in and were recovered, but one didn’t. So that’s who we’re actively searching for,” GFD Fire Chief Joey San Nicolas says.

Guam Fire Spokesman Kevin Reilly says the 911 call came in at about 5:50 pm, but the man was reportedly swept out around 5 pm yesterday.

“The current does take, following the data models that the Coast Guard has put in and set up and of course by local knowledge, the current does take or does go down south, approximately eight miles out of Oka Point and so we’ve taken that into a factor. We’ve sent boats out as far out there to conduct a search as well,” San Nicolas explains.

The 31st Marine Expeditionary Unit sent out a statement today noting that the missing man is a part of their team and was on Guam with the USS Green Bay. The unit is based out of Okinawa, Japan. The Marine’s identity has not been released pending notification of next of kin. Fire Chief San Nicolas explains how long authorities will be conducting search and rescue efforts.

“Normally search efforts would last at least 72 hours total and then we start ramping down and then turning it more into a recovery effort. This is in coordination with the United States Coast Guard command center. Captain James Pereda, myself, we work together, depending on the effort and what we’ve done to saturate the area, we confer with each other and come to an agreement on when it’s an appropriate time to terminate the search. But as of this time we’re committed to do the best we can to find this individual,” he says.

San Nicolas says that the search area extends all the way down to Magundas Beach near the Port Authority of Guam. 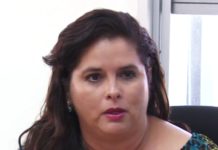