Guam – The search continued Sunday morning both within, and outside Umatac Bay for 31 year old Steve Alcantara who fell off  his jet ski Saturday afternoon about 5 pm and never surfaced.

His brother, Roque Alcantara told PNC News Sunday morning “It still hasn’t settled in that this could happen to such a guy. Please don’t criticise him for what has happened. Its very unfortunate.”

Rogue Alcantara, his mother, other family members and friends were gathered under the awning off the Umatac Mayor’s Office at the head of the Bay, looking out at the search efforts, waiting.

Saturday afternoon, many of them had been celebrating a birthday party at the same location. But that turned into a night, and day of ongoing anxiety.

“Apparently the gentleman was on a jet ski, pulling a knee boarder,” said GFD Spokesman Andy Arceo Sunday morning. “He just apparently fell off of it, and they haven’t seen him since,” said Capt. Arceo.

“It happened right at the mouth of the Bay, around 5 o’clock yesterday,” said Capt. Arceo.

At the scene Saturday night, the Navy’s HSC 25 helicopter was hovering over-head. A rescue boat, and rescue personnel on jet skies were making passes around the Bay.  “I guess for some reason his ski tipped over and he went in the water,” said GFD Battalion Chief John Wusstig Saturday night. “And he wasn’t wearing a life jacket.” 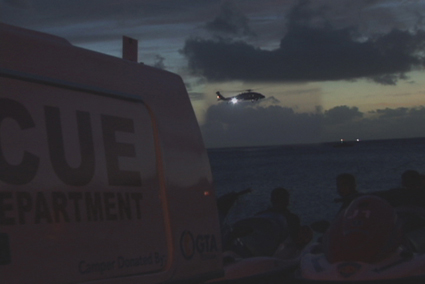 Saturday evening, 6 divers went in the water searching, but conditions below the surface were murky, said Chief Wusstig. They found nothing.

One man Saturday night, obviously frustrated, yelled at the rescue personnel, “Come on! Follow the current!”

The surface of the Bay had been calm on Saturday afternoon, said Chief Wusstig.

A High Surf  WARNING has been in effect since Thursday, and remains in effect until Monday evening at 6 pm.

Strong winds Sunday had kicked up white caps over the Bay.

A Guam Police rescue vessel joined Guam Fire Sunday. A group of local Umatac divers also joined in the search, while off the Bay the Coast Guard Cutter Washington was on the look-out and the Navy’s HSC-25  was back over head, scouring the coast line south of Umatac Bay where the current might have taken the body. All of them looking for a sign.

No sign of Steve Alcantara had been found as of noon Sunday.

“Our main concern right now,” said Rouque Alcantara, “is just being strong for one another and praying and hopefully we can have a recovery for our loved one.”