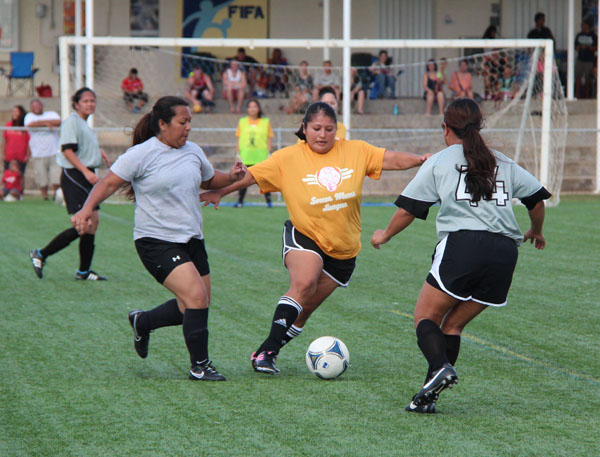 Guam – When it looked like the Heat Wave and Femme Fatale would battle to a scoreless draw during their opening week match of the Guam Football Association Soccer Moms League, the Heat Wave’s Darla Topasna heeded her coach’s direction to score a goal within two minutes of the final quarter.

“It was my first goal, I finally did it,” said Topasna, who is playing in her second Soccer Moms League. “Our coach gave us two minutes to score and we hit our time. The team was really depending on us in the front, and it felt great to finally get the ball in.

“I look forward to the Soccer Moms League – it’s a good workout for me, and soccer is a good sport,” added the Merizo resident who has a son, Joseph Mansapit, who plays in the U10 division for the Southern Heat.

[Players from the Lady Bombers (yellow) and the Queen Cobras (gray) play an opening week match of the Guam Football Association Soccer Moms League at the GFA National Training Center.]

“It’s always a different atmosphere during the Soccer Moms League,” said GFA Women’s Administrator Grace Martinez. “You see all the moms having a great time learning the sport together with their teammates and the camaraderie shared among the different teams. It’s purely recreational, just really a fun outlet for them on Sundays. It’s great that they have a league to call their own.”

League matches begin at 3 p.m. on Sundays. Each match consists of four 10-minute quarters, with an extended break after two quarters of play. The league features a 7-A-Side format with a smaller field size. All players must be mothers and have minimal to no experience playing the sport. 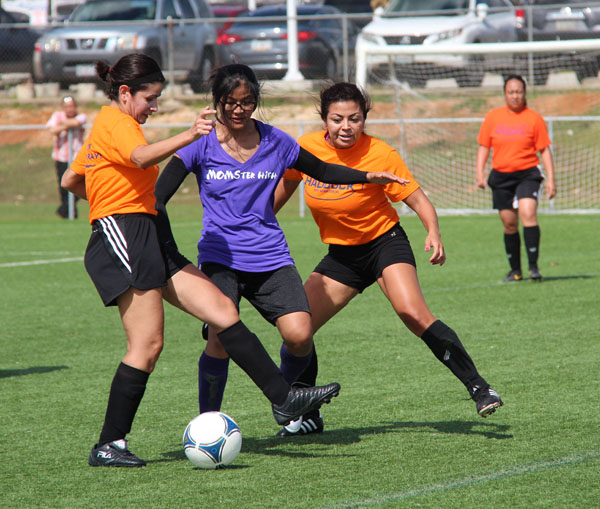 To inquire about the league or other initiatives for women’s soccer, contact Martinez at GFA by calling 637-4321 or through E-mail at dgmgroup8@yahoo.com

Updated schedules will be posted online for download at http://www.guamfa.com/all-leagues-womens-7-a-side-results