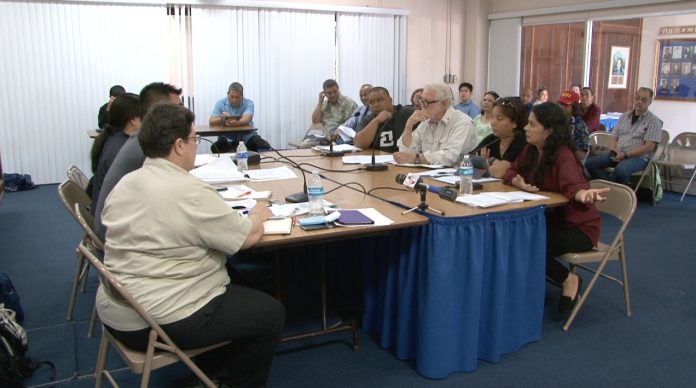 A second public hearing on the rules and regulations governing medical marijuana on island provided a fiery debate between citizens and regulators, this time regarding how much the program would cost to maintain.

Guam -. Regulators vs. Citizens. It’s an age-old battle and fundamental right to be able to question the laws that govern them. Today at the public hearing on the rules and regulations for Medical Marijuana on Guam, the battle raged on as regulators sat across from groups of residents who raised concerns over some of the bills finer points. One of the main arguments was over how much the program would cost to maintain, for the government agencies and the private buyers who wish to start a dispensary. Mo Cotton, a resident of Guam and a future user of medical marijuana, voiced his concern over the high costs of starting a dispensary.

“I have cancer, and I would like to not get related except for to slow it down, I’m 80 years old, I don’t mind dying but I don’t want to die with pain, so pain is my concern, I would be a user, but getting to her point and it was my big point too…35-thousand dollars is going to knock out all the small farmers who would, probably would like to be in this business,” said Mo Cotton

Another issue was why there should be any fees associated…period…Cotton mentioned Washington State, where there are no fees associated with starting a dispensary according to Cotton. Andrea Pellacani, of Guam Grassroots wondered if the fees, along with the high cost of growing marijuana, would bankrupt businesses, especially if there is a low-participation rate to begin with.

“It’s important to share how our fee assessments work when we develop rules and regulations, first of all the government is not allowed to profit, at least it’s not our position, department of marine development of rules and regulations to profit from the fee schedules what we seek is to recoup the cost to doing business as Cindy has mentioned to implement that program or that activity,” said Public Health Officials when responding to resident concern.