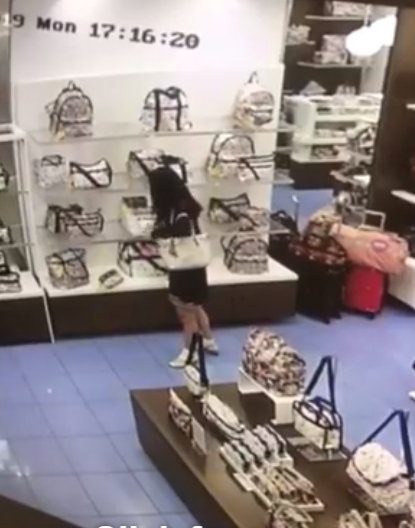 Guam – A video clip obtained by PNC showed a woman apparently shoplifting inside a high-end retail shop at The Plaza shopping center in Tumon.

The woman is wearing a black-and-white striped dress with a black cardigan, black sneakers, glasses and  carrying a light colored purse.

Her interest sparked when she picked up what looks like a wallet or small pouch.

She then took the stuffing out of the item and placed it on the display before turning and unzipping her purse to pocket the item.

With the goods in her bag, she then turned her attention back to the display and moved the items around in an apparent attempt to hide her act. The woman then walked out of frame.

Based on the surveillance footage, the incident occurred on Monday, March 18 at around 5:15 p.m.

PNC has reached out to the management of The Plaza and the Guam Police Department for comment, but none was received as of news time.