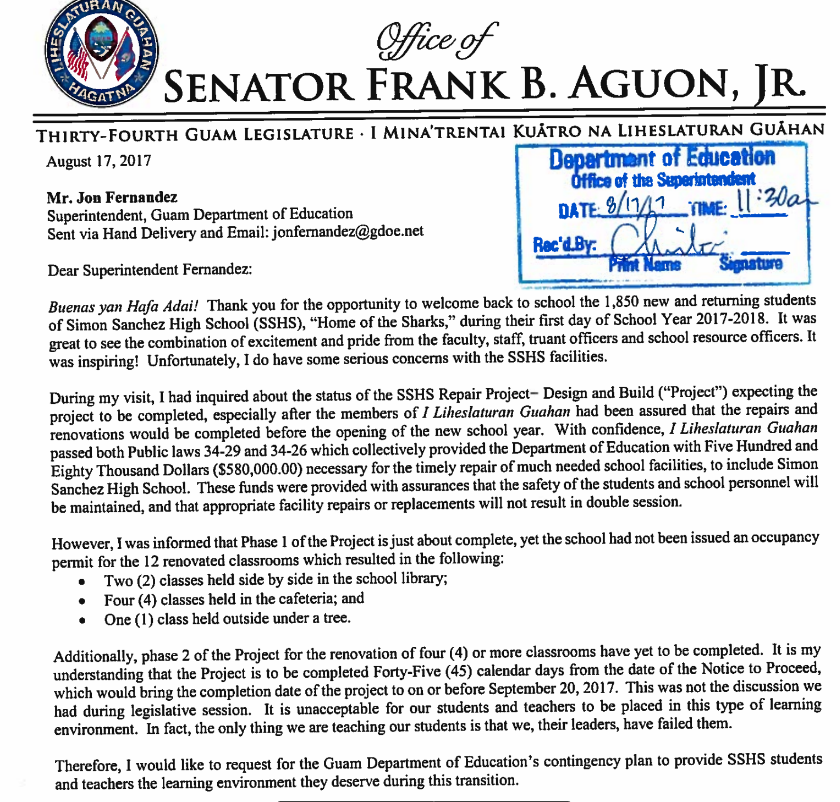 Senator Frank Aguon Jr. drafted a letter to the superintendent about the perceived disarray during a visit to Simon Sanchez High School yesterday morning.

This drew criticism from Senator Frank Aguon Jr. who drafted a letter to the superintendent about the perceived disarray during a visit to Simon Sanchez High School yesterday morning.

At the home of the sharks, administrators scrambled to house 13 classrooms before they were finally given the green light of approval from the Department of Public Works at 10am yesterday.

In addition, multiple rooms experienced air conditioning outage which prompted at least one class to conduct school in their library.

When the Democrat lawmaker arrived on campus, he apparently questioned the timeliness of the repairs, to which Superintendent Jon Fernandez responded that Phase 1 was completed and Phase 2 of the scheduled renovations was on time.

“It has really bothered all the members of the Board of Education [to hear of] Senator Frank B. Aguon Jr.’s observation while visiting Simon Sanchez Senior High the first day of classes yesterday… It should be noted that this issue came up before the ending of the last school year…I am sure that the senator is very much aware of the process from procurement –who are the respondents and who was selected,  that took time.
The signing of the agreement and the Notice to Proceed, –all these the senator should be fully cognizant does take time. It is a snap of a figure to proceed the following day…The senator also [alluded] that he observed a class under a tree.  As a teacher myself, this is common for a different environment of learning.
After reading the Senator’s letter, all the board members felt that this is being politicized and we firmly feel our primary mission is to ensure a safe learning environment and that includes all schools within the Guam Public School System.”