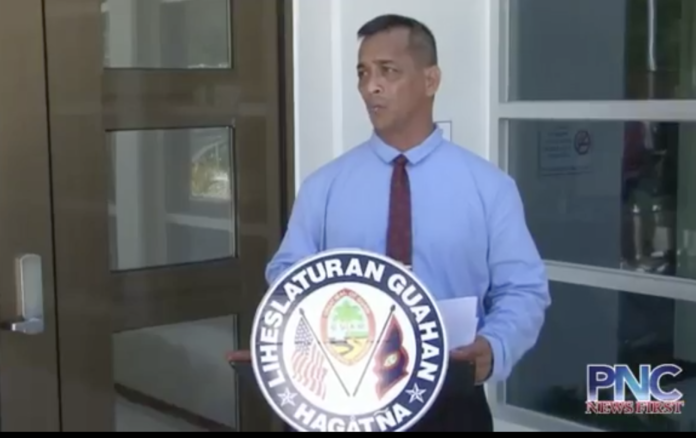 Guam – If one local gubernatorial contender gets his way, the Chamorro Land Trust Commission will temporarily cease to operate as we now know it.

Bright and early this morning, Sen. Frank Aguon, Jr. (D) called news media to the gates of the legislature to announce his plan to stop CLTC operations in their tracks amid allegations that politically-connected applicants enjoy favored access to the trust’s land leases while others wait decades.

“The issue at hand is the lack of transparency, the lack of accountability, and the lack of integrity of the administration of the CLTC program as a whole,” Aguon said.

“Transparency and public accountability is not only mandated by the law that governs the CLTC program, it is a mandate from the very people who placed their trust in their government to maintain and uphold a fiduciary responsibility to the beneficiaries of the CLTC program.”

Due to widely suspected malfeasance in the administration of the trust, the senator aims to slap the following sanctions on it:

(1)    A temporary moratorium on leases and licenses,

(3)    Slashing the Dept. of Land Management Director’s salary by 25 percent, and

(4)    Placing the whole trust in receivership.

This morning, Pacific News Center approached two Land Management offices on separate floors of the ITC Building in search of a response from Land Management Director Michael Borja or his designee, but no interview was granted.

Meanwhile, Aguon’s bill is gunning to give a receiver 90 days to get the trust’s house in order with fair administrative procedures, as required by law.

“If [Bill No. 284-34] is passed [into law], a temporary local receiver shall be granted all the authority of the administrator of the CLTC and the director of the Department of Land Management to address, among other things, the lack of rules and regulations  that deal with standards of conduct, conflicts of interest, disclosure,  self-dealing, honesty and ethics,” noted Aguon.

Sen. Aguon says the local receiver would be appointed by the governor of Guam from a pool of retired Guam or CNMI judges. And he reiterated Guam Attorney General Elizabeth Barrett-Anderson’s assertion that Chamorro Land Trust applicants should be permitted to resume their prior sequential status, subject to the date and time they applied.