As lawmakers prepare to head into an emergency session, the session hall at the Guam Congress building where they’ll be meeting has been set up to accommodate social distancing.

Senators are so far required to show up in person at 10 am Thursday.

The desks in the session hall have been re-arranged to ensure that senators are at least 6 feet apart.

According to the Speaker’s office, senators will not receive any paper hand-outs to eliminate the spreading of germs and they will all be wearing face masks.

The urgent session was called to discuss several bills related to COVID-19, including one introduced today by Senator Regine Biscoe Lee and supported by eight other senators.

The bill requests that the governor transfer up to $15 million from any government account to pay either $400 to eligible single filers or $800 for joint-filers.

The governor, however, will not budge on the matter, saying again today that they shouldn’t be appropriating local money.

“And if I’m going to find $15 million – that’s not enough. Because my estimate in terms of the one-time tax rebate, is anywhere from $130 million to as high as, I think, $150 million,” the governor said.

On the federal side, the Department of Revenue and Taxation had a meeting with the U.S. Internal Revenue Service today to discuss the implementation plans for the one-time stimulus payments.

DRT Director Dafne Shimizu told PNC that the plans are not yet final.

The Department of Labor also said today that they’re still finalizing their plans as well. 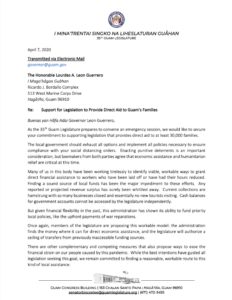