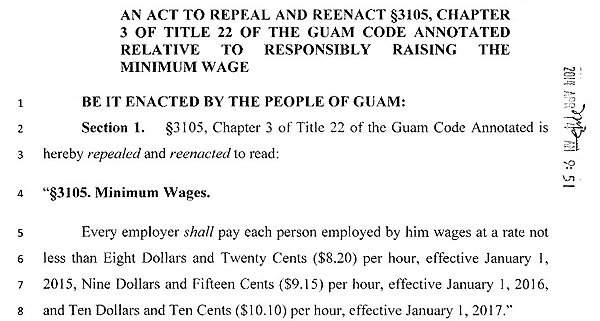 Guam – Vice Speaker B.J. Cruz this morning formally introduced a bill that would raise the minimum wage on Guam to $10.10 an hour by 2017.

The Senator announced his intention to introduce the bill last Thursday during a meeting of the Guam Women’s Chamber of Commerce saying at that time:

“We’ve already increased the Government of Guam. If you see the disparities between GovGuam and the private sector, it’s embarrassing. So everyone is having to suffer through that already because of the increases that we’ve done with Competitive Wage Act and so it’s only fair to make sure that those with the lowest wages right now are able to be able to buy that can of Spam and that bag of rice”.

In a release Monday announcing the formal introduction of the Bill Senator Cruz countered critics who say raising the wage rate to $10.10 an hour would be a “disincentive to earn more” because it would not be “insufficient to compensate for a corresponding decrease” in SNAP benifits.

He cites figures from the Food and Nutrition Service that administers SNAP which he says show that SNAP households are financially better off if they are able to secure employment or increase their earnings (see Table 1 below).

The measure itself is merely 8 lines, setting the wage rates and the dates they will take effect over the next 3 years.

READ the release from Senator Cruz below:

VS Refutes Another Minimum Wage Myth

(April 14, 2014 – Hagåtña) Vice Speaker Benjamin J.F. Cruz has introduced legislation to responsibly increase minimum wage from $7.25 to $10.10, that would benefit an estimated 22,363 workers and their families by 2017—with an estimated 7,840 workers seeing the first increase on New Year’s Day 2015, according to the Guam Department of Labor, Bureau of Labor Statistics.

Since Guam’s minimum wage is not indexed to the cost of living, the minimum wage must be increased legislatively from time to time to make up for the loss in its real value—or purchasing power—by inflation.  Since 1990, the island’s minimum wage has been federally increased eight times without the economic devastation typically predicted by opponents.

A recent point of contention is the false assertion that Cruz’s proposal will increase wages at a rate which is insufficient to compensate for a corresponding decrease in subsidies from the Supplemental Nutrition Assistance Program (SNAP), thus creating a disincentive to earn more.

Figures from the federal Food and Nutrition Service that administers SNAP, colloquially known as the food stamps program, however, say otherwise.  By design, SNAP not only acts as a safety net for the elderly, disabled or temporarily unemployed, but also supplements low-income wages.  As a result of the SNAP benefit calculation rules, SNAP households are financially better off if they are able to secure employment or increase their earnings (see Table 1).

Table 1. Net increases for SNAP families (monthly expenses of $500 for rent and $200 for utilities) after full-time, minimum-wage earning heads of household receive a minimum wage increase to $10.10 an hour, based on FNS SNAP Eligibility Screening Tool.

“The clear majority of people on SNAP work to support themselves and their families; they just don’t earn enough to do it by themselves,” said Cruz, refuting unsubstantiated statements given by public health that were reported by media today.  “We need to ask ourselves the question: Just how much poverty should people be subjected to when working full time?  How poor should their children be?”

The Guam Bureau of Statistics and Plans report that costs for housing (24), food (32), medical care (15), electricity (42), and fuel (26) are all up by double-digit percentages since 2007, but local Department of Labor figures show that the average hourly rate in the private sector has only increased 14.5 percent since the third quarter of 2007 when the first of the last federal three-step wage increase was implemented seven years ago.

“As a judge, I learned that the greatest dangers to the truth are well meaning men who choose to find their conclusions first and their evidence second,” added Cruz.  “If you take an honest look at the facts, review the evidence, and analyze the Guam experience, you will find that an increase in the minimum wage does not kill jobs, cause massive inflation, or outpace public benefits; by giving minimum wage workers and their families a raise; we decrease dependence and increase dignity.”