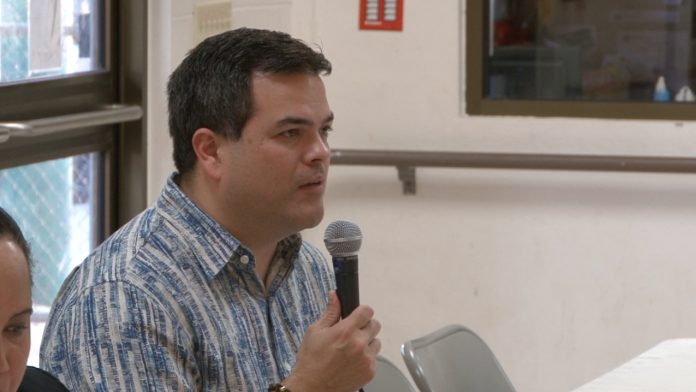 The first public hearing was at the Dededo Senior Center. The next hearing is scheduled for Thursday, May 26 at 6 p.m. at the Sinajana Senior Center.

Guam – The high fee structure for Guam’s medicinal marijuana continues to be a sticking point for some residents  who say the fees will stymie small business participation in the program. Senator Rory Respicio, however, fired back saying the fees are too low.

“The biggest concern from the first draft based on all the written and oral testimonies was the 35-thousand dollar non refundable certificate fee which was chopped up into a licensing fee and three permitting fees totaling 30-thousand dollars and sent it back to you. We the people can do math and it’s the same thing,“ says Andrea Pellicani, Medical Marijuana Advocate.

Pellicani, who is also the president of Women Grow Guam, compares the illicit market to the proposed medical marijuana market. She says the lack of privacy and protection will force patients to go to the black market for medicine, instead of the medical marijuana program.

“Currently patient privacy and confidentiality is not protected in our regulated market but if you wanted to go on the street corner and pick up a doobie, pretty sure no ones going to say anything, so I would say there’s more privacy on the illicit market right now,” said Pellicani.

The current mandate in the rules and regulations require potential medical marijuana patients to register with public health and to give them a copy of your drivers license or stet identification.

But senator Rory Respicio, who was present at the meeting, fired back, saying the 30-thousand dollar fee for medical marijuana is too low.

“I think instead of lowering the fees, we have the opportunity to increase the fees and i know that when 35-thousand was first talked about, there was pushback and i was thinking more along the lines of 2-million dollars per license. This is a huge industry and this is an opportunity for our people to reap the benefits of the cost of doing business for this kind of business,” said Respicio.

“A fee that high would encourage or invite investors from off island or outside or conglomerates or corporation to come in and take over the whole industry on island,” said Wolf.

“Our pig farmers on Guam have been talking about building a slaughterhouse. And then when it starts rolling everybody starts talking about making pork chops, making bacon, and this medicinal deal remind me of that now. We are talking about making millions of dollars and were not giving our local people the opportunity,” said Wusstig.