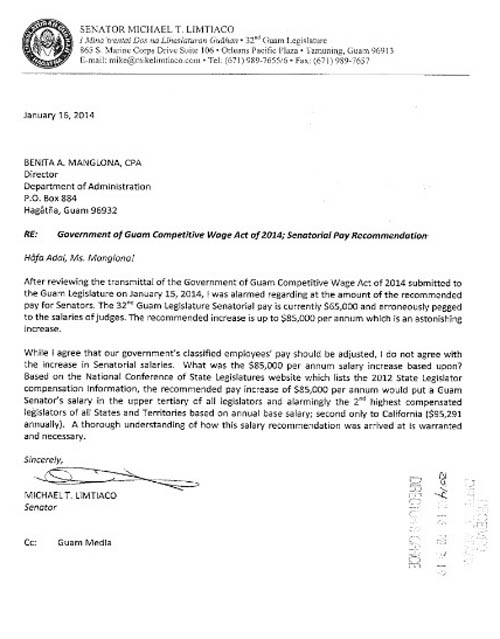 Guam – Senator Mike Limtiaco says that his review of the “Guam Competitive Wage Act of 2014” has revealed a proposed increase in salary for Guam Senators from $65-thousand dollars to $85-thousand dollars.

He calls the proposed $20-thousand dollar hike in pay “alarming” and “astonishing”. And in a letter to Department of Administration Director Benita Manglona, he states “I do not agree with the increase in Senatorial salaries.”

In an email to PNC News he stated:  ” Yes. That’s in the document we released. It’s the recommended salary for senators by DOA HR. It’s up to senators if they would like to accept the recommendations. Senators work, so they were included.”

Senator Limtiaco, in his letter to the DOA Director, asks Manglona “What was the $85,000 per annum salary increased based on?”

And he points out that a review of the National Conference of State Legislatures website reveals that the proposed $85-thousand dollar pay increase would “alarmingly” make Guam’s lawmakers the second highest paid State and/or Territorial lawmakers in the nation, second only to California which pays its lawmakers $95,291.