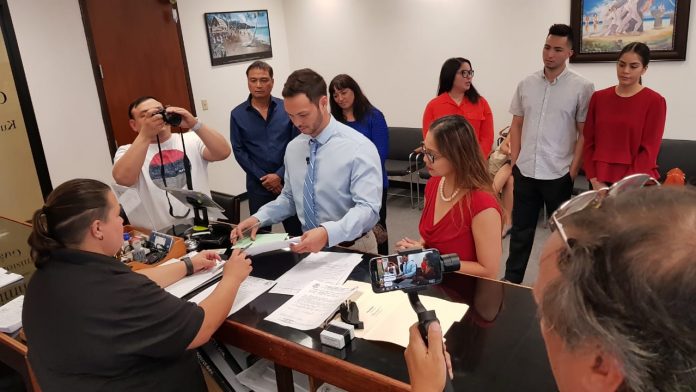 Guam – Senator Michael F.Q. San Nicolas officially filed his bid for Congress this afternoon, making him the second candidate to file, thus ensuring that there will be a head to head contest within the Democratic Party.

Already, campaign signs had been placed throughout the island as the once yellow and green “Responsible Guam” signs are now recognizable in a congressional red, white and blue.

San Nicolas has served three terms in the Guam Legislature, and today he was joined by family members as he looks towards a future in Washington D.C.

On the Senators Facebook page he is quoted as saying: “Our service as your Delegate to Congress will yield the same as our service these last six years – a transformation of outcomes and expectations, rooted in an unrelenting pursuit of what is right and just for our people.”

The other Democratic candidate is Congresswoman Madeline Bordallo, who is looking to retain her delegate seat for a ninth term. Former Public Auditor Doris Flores Brooks has also announced her bid for Congress, having yet to officially file.