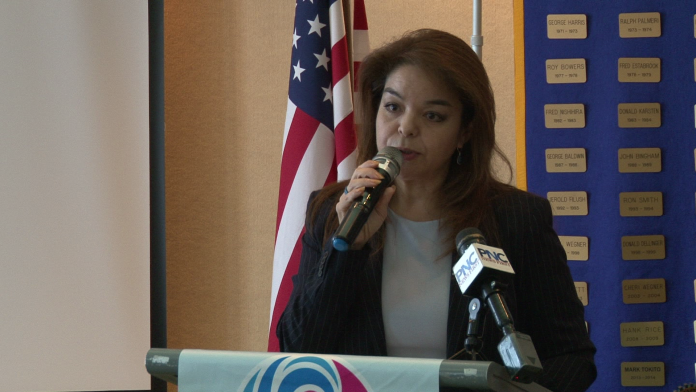 Guam – Senator Louise Muna spoke to the Rotary Club of Tumon Bay this afternoon about her recently introduced Bill 302, which would allow for home cultivation of medicinal cannabis.

Senator Muna stated that it is unfair for medical cannabis patients to wait four years with still no relief in sight, therefore prompting her to introduce a temporary fix – home cultivation. Muna explained to Rotarians that Bill 302 was written so that no new rules would need to be promulgated. According to Muna, all Bill 302 would do is allow patients or their caregivers to grow a limited amount of cannabis until a dispensary is operational.

Muna says, “My preference though was to have cannabis available to patients through a dispensary as called for in our existing law. Sadly for these patients, it doesn’t appear that medical cannabis will be available anytime soon. I feel for these people especially those with cancer who would get much needed relief from cannabis if it were available to them.”

Her bill would require the Department of Public Health and Social Services to issue permits to patients or their caregivers to cultivate cannabis. The permit would then allow patients or their caregivers to cultivate cannabis under several provisions. A patient would be allowed no more than three flowering mature plants and six juvenile plants at any given time. Cannabis plants must not be visible from public locations and must be stored in secured areas. Public Health would be allowed to inspect the area at any given time.

“We do have the rules and regulations in place but we don’t have a laboratory. It’s going to cost a lot of money. We were told up to a million dollars. We definitely won’t find that anywhere anytime soon so for now we can get the cannabis to the patients who absolutely need it,” says Muna.

She hopes to have a public hearing set for Bill 302 sometime next month.