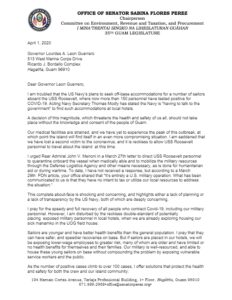 Guam Senator Sabina Perez has raised concerns about the Governor’s decision to allow USS Roosevelt sailors who have tested negative for COVID-19 to quarantine in Guam hotels off the ship and outside of Naval Base Guam.

In a letter to the Governor, Perez said she is “troubled” by the decision.

“A decision of this magnitude, which threatens the health and safety of us all, should not take place without the knowledge and consent of the people of Guam,” wrote the Senator. “It is reckless to allow USS Roosevelt personnel to travel about the island at this time.”

Governor Lou Leon Guerrero Wednesday announced that she had granted the Navy’s request to allow sailors from the Roosevelt to use the hotels under strict conditions including daily health screening of the sailors, and military security on every hotel floor.

Sen. Perez, however, cited a March 27th letter she sent to Rear Admiral John V. Menoni urging him “to direct USS Roosevelt personnel to quarantine onboard the vessel when medically able and to mobilize the military resources through the Defense Logistics Agency and other means necessary.”

She also wrote that “if sailors are placed in our hotels, we will be exposing lower-wage employees to greater risk, many of whom are older and have limited or no health benefits for themselves and their families. Our military is well-resourced and able to
house these young sailors on base without compounding the problem by exposing vulnerable service workers and the public.”

“I urge you to oppose this dangerous request and protect our sailors on base while ensuring our service and hospitality workers, and their families, are also protected,” concludes Sen. Perez.