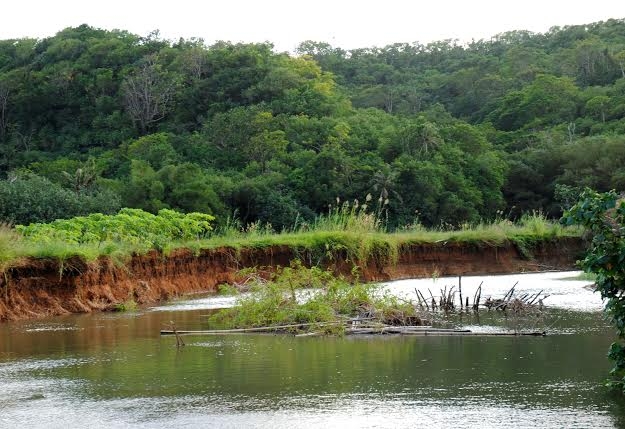 The use of sediment filtration socks and the planting of more trees could be the answer to erosion problems in the South.

Guam – Senator Rory Respicio will soon be introducing a bill to create a Southern river erosion council that will be tasked with coming up with a master plan for how to deal with ongoing erosion in southern rivers.

This council will then report their findings to the Southern development master plan task force. Senator Respicio has been holding roundtable discussions on the erosion problems in the Talofofo and Ugum rivers and how the erosion has negatively affected farm lands, drinking water, the water shed itself and even the coral reefs. “They’ve asked me to do something to institutionalize a process that establishes a council to recognize all of the stakeholders that allows these pieces of the puzzle to come together,” said Senator Rory Respicio.

The good news is Dr. Austin Shelton of the University of Guam’s Sea Grant program has conducted research on the erosion problems in the Umatac watershed. In the early 2000’s fishermen in Umatac began complaining about lower fish catches. Dr. Shelton found that poor development practices in the past contributed to large amounts of sedimentation eroding and ending up in the coral reef systems where they smothered and killed large expanses of coral and fisheries habitat. Dr. Shelton and the Humatac project tested two watershed restoration tools. One is a sediment filtration sock the other is the planting of trees. Both worked extremely well.

“These two tools would be very applicable to Ugum and the Talofofo watersheds and that is what we were discussing today at the erosion roundtable meeting is how those tools may be able to work in those specific watersheds.”

Dr Shelton says that the sediment filtration sock and trees they tested in Umatac captured 112 tons of sediment and prevented that sediment from reaching the coral reefs.