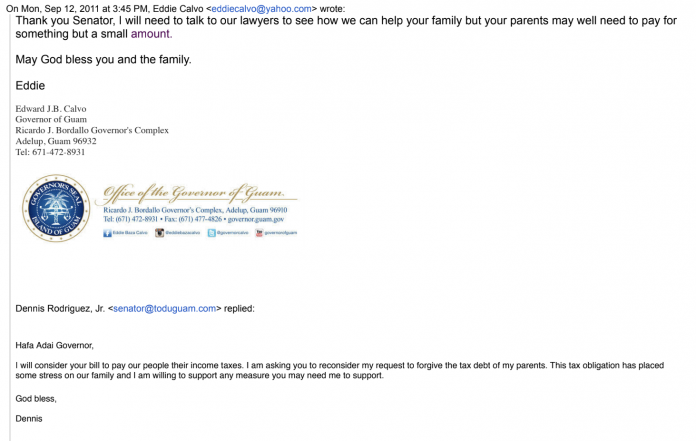 Guam – As the political season heats up, the creativity in fabricating lies seems to be turning up a notch as well. Early this morning, island media received an anonymous email containing purported evidence that Sen. Dennis Rodriguez and Gov. Calvo conspired to bail Rodriguez’s father out of a huge tax debt.

The senator quickly addressed those rumors in a press conference, saying he could be the target of another political campaign.

“I can tell you that those are fake emails, those are fabricated. None of those emails have actually been sent out by me,” asserted Rodriguez.

Early this morning an email was forwarded to PNC containing a request purportedly from Senator Rodriguez to Attorney Tom Fisher seeking his help in dealing with a string of old correspondence with Gov. Calvo. This supposed request seemed to imply that Rodriguez wanted to destroy evidence of any past improprieties.

Those old emails show what appear to be back and forth correspondence between Rodriguez and Calvo from 2011 involving Rodriguez’s father, Dennis Rodriguez Sr., a former cabinet member of the Gutierrez Administration.

In it, the rookie senator promises to vote in favor of the governor’s bond borrowing measure in exchange for forgiveness of his father’s tax debt—at the time, it was nearly a million dollars without interest and penalties.

While the case settled in federal court in 2012, rumors continued to invade political circles that the governor influenced the outcome of the settlement as Rodriguez ascended the governor’s political ladder to become an ally despite their opposing party affiliations.

“Number one, I never sent those emails. That’s a fact. The way that it’s structured, that’s not how the signature mark of my email comes out. If you take a look, I believe the governor’s email was being used was a Yahoo account,” Rodriguez pointed out. “This is an issue since taking office eight years ago that my opponents have always tried to use and taint on me.”

So what did happen with the senator’s parents’ tax settlement? Rodriguez explains that his father failed to file his tax returns between 1996 to 2001.

“He didn’t file his taxes on time which, yeah, it’s wrong,” acknowledged the senator. “But those years, he paid the estimated taxes he owed. He was busy. He says he was busy as a cabinet member of the Gutierrez Administration.”

Eventually, Rodriguez Sr. took the case to federal court in an effort to dispute the amounts owed and negotiate a better deal.

“It took 11 years for them to be able to resolve it and it was resolved. A payment of taxes were made by my father and it was signed off by a federal tax judge,” he said.

PNC: “Did you ever use your official position as a senator to help them?”

As for the culprits behind the fake emails:

Senator Rodriguez says he, in fact, voted against the governor’s bond borrowing measure.