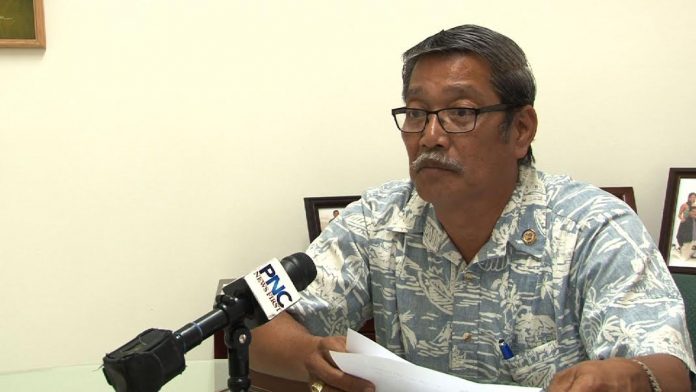 Guam – Senator Joe San Augustin is saying he voted no on the TRAN bill because of the fiscal shortfall that will affect GovGuam this fiscal year.

The senator had previously voted in favor of the measure, but according to a press release he issued today (Thurs.) he changed his mind after developments that have occurred since the governor first introduced the bill back in May of 2017. The senator says things like the impacts of the Trump tax reforms were unknown at the time, but it is now estimated that these tax reforms will cost GovGuam $48 million for fiscal year 2018. With this new development the senator decided “voting no was the most prudent course of action.”

“Last year we paid out refunds without a loan. We can do so again. How can we borrow now when we’re losing money,” Senator San Augustin asked in his release.

SAN AGUSTIN VOTES ‘NO’ ON TRAN BILL DUE TO FISCAL SHORTFALL

Sen. Joe S. San Agustin voted no on Gov. Eddie Calvo’s TRAN bill during the Legislature’s call to vote on Jan. 24 at the Guam Congress Building. He had previously voted yes on the measure. Before the vote was called, San Agustin urged his colleagues to discuss how things have changed since the TRAN bill was put forth in May 2017.

When the governor’s bill was first introduced, the fiscal impact of President Trump’s tax reform was not known. Now we know tens of millions of dollars in government revenue will be slashed. Adelup has already projected a shortfall of $48 million dollars in the first four months of the fiscal year. Gov. Calvo has called for all agencies to economize. With the new numbers, San Agustin decided voting “no” was the most prudent course of action.

“Last year we paid out refunds without a loan. We can do so again. How can we borrow now when we’re losing money? The governor asked all agencies to cut spending across the board. With a $48 million shortfall due to Trump tax reform, the landscape has changed – I can no longer support the TRAN bill. We need to streamline and collect lost revenue. We cannot risk a financial crisis,” San Agustin said.

“These huge cuts will impact our schools, manåmko, hospital and Public Health, police and fire departments – every level of public service will feel the crunch. While I want everyone to get their refund as soon as possible, it doesn’t make sense to borrow such a large amount now. We can find a more fiscally responsible way to pay refunds,” San Agustin said.