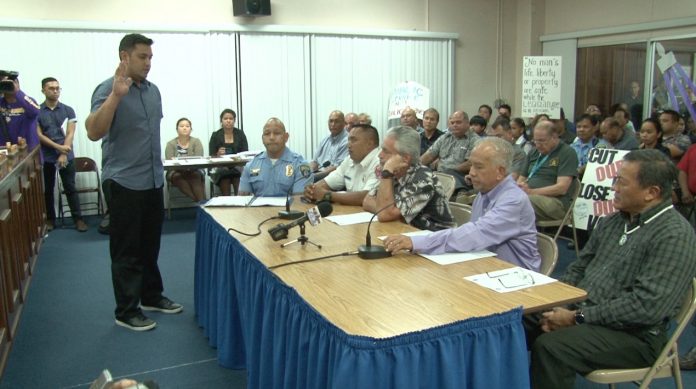 Before beginning the testimony for bill 204, Senator Mike San Nicolas asked panel members to swear in; The panel refused.

Guam – Governor Calvo along with multiple directors showed up in full force yesterday to voice their unified opposition to bill 204.

Yesterday’s public hearing for bills 201, 202 and 204 was full of cheers and jeers and everything in between. The legislative hall was packed with proponents of bill 204. The hearing began with controversy as Senator San Nicolas’ first and second order was to have the first panel of directors swear. The directors denied and began the contentious back and forth that would set the tone for the rest of the hearing.

During the testimony of Joanne Brown, Port Authority Guam General Manager, Senator San Nicolas asked Brown if he could clarify something to her.

“I don’t know, I don’t need you to clarify anything for me, ill tell you I’m here to provide my comment,” said Brown.

“Before I read my testimony though, I do take exception to the fact that you are calling me a liar Senator San Nicolas…don’t interrupt me. I picked up my right hand to serve this country, to serve this island because many of us have done that and on the even of Veterans Day, to force me to require me to an oath as if I came here to lie to you is insulting to my integrity,” said Fire Chief San Nicolas

Senator San Nicolas was quick to point out on each occasion that he was not there to insult veterans.

Aside from back and forth, the Governor and his agency heads began to testify on the measure itself.

“If this legislature was so concerned about fiscal savings, then senators would have acted on senator Dennis Rodriguez bond refinancing bill eleven months ago, had you Senator San Nicolas passed that bill, we would have saved ten times the amount in question today, that is an additional $30 million in savings for no apparent reason, ” said Department of Administration Director Tony Blaz.

Fire Chief Joey San Nicolas compared his pay to other fire chiefs in the pacific region.

“Compared to fire chiefs both military and local, on Guam and in the pacific region the Guam Fire Department Fire Chief earns 30- 50 thousand less per island, but I have submitted these numbers before to the legislature,” said Fire Chief San Nicolas

Then halfway through the hearing, Gov. Calvo showed up to give his testimony in person.

“I want to make a little caveat on that I’m stating my opinion on the senatorial pay cut but I will accede to your desires to how you vote on this measure because again you are a separate branch of government and with that even though I believe it is the wrong direction I will acceded if you decide to move forward accordingly,” said Calvo.