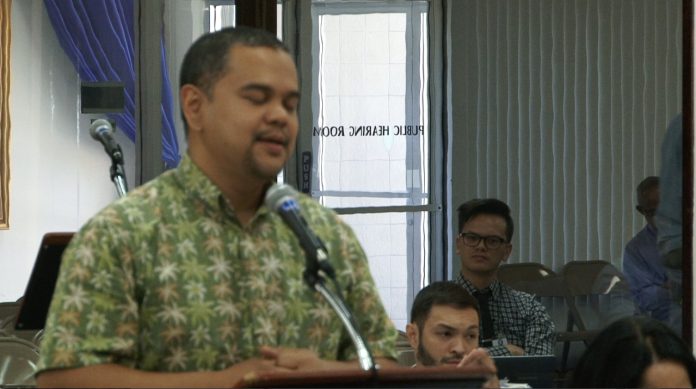 Senator Dennis Rodriguez Jr. introduced the resolution after four of his bills were held in Senator Mike San Nicolas’ committee without a public hearing.

Guam – Discussion on how much power a committee head should have continued today at session, where lawmakers discussed a resolution that, if passed, would ensure the timely public hearing on of all bills. Senators also discussed the $1.5 million in funding needed for Festpac.

Senator Dennis Rodriguez Jr. introduced the resolution after four of his bills were held in Senator Mike San Nicolas’ committee without a public hearing. The resolution would amend the 33rd legislatures standing rules to incorporate the ‘120 day rule’ that says if a bill has been in committee for longer than 120 days, the author of the bill can hold their own public hearing. Senator Mike San Nicolas, is the committee head who initially held Rodriguez’s bills saying that there was no money available for them.

“I just find it very intriguing that the same senators who are clamoring for public hearings on election year spending are the same senators who bypassed public hearings to give themselves raises, you know this thing to try and get people to participate is just very sad when the peoples participation is only important when it comes to election year spending for what I would say are votes versus the people’s voice when it comes to giving yourself pay raises and doing it under the cover of darkness,” said San Nicolas.

Senator Dennis Rodriguez Jr. However says that the resolution prevents one senator from dictating the legislative agenda.

“I’m very pleased and happy with at least the majority of discussion on this piece of resolution here Mr. speaker hat will really put back some sense of order on this process. We’ve seen that the bills that may have not moved forward are not all about not having funds or not having money,” said Rodriguez.

At a committee on rules meeting, all four of Rodriguez’s bills were re-referred out of san Nicolas’ committee. San Nicolas maintains Gov. Guam does not have money to spend on the four bills he held. Just yesterday PNC reported both GCC and UOG are behind 21.6 million in cash allotments.

Also discussed at session, Senator Tina Muna-Barnes added ‘verbiage’ to her bill 252, which was originally used for capital improvement projects in Tumon, to help address a $1.5 million dollar shortfall for Festpac funding. Senator’s Mike San Nicolas and Nerissa Underwood are questioning the funding source of the bill.

The Governor’s bill identified next years tourist attraction fund as a funding source, which hasn’t been collected yet. This means the additional $1.5 million would have to come from this fiscal years cash flow.