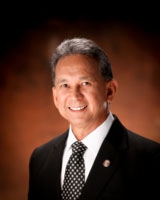 Ada says, in this situation, it saves more by buying new buses.

Guam – Senator Tom Ada introduced Bill 253, which would authorize the use of about $1.7 million dollars in lapsed funds for the purchase of new school buses.

According to a release from the Senator’s office, the Department of Public Works currently operates a fleet of 133 school buses, however, about 60% of those buses are beyond their service life in terms of years and mileage. Senator Tom Ada says instead of paying high maintenance costs for the older buses, the government would save more by replacing some of the fleet with newer and more efficient buses. The budget laws that were passed for FY2014 and FY2015 mandated that  “any balance of unused funds appropriated to DPW shall carry over into FY2016 for the conduct of maintenance services for the school buses.” Bill 253-33 expands the authorized use of the lapsed funds to include the purchase of new buses. It is estimated that the purchase cost for a bus is about $90-thousand dollars.

Ada says, “Sometimes in those situations, it’s less expensive to simple replace those really old vehicles and replace them with new ones. I think they will still use the funds available to continue with maintenance but also identify buses that are more economical to be replaced with newer ones so Bill 253 would give them the authority to purchase new vehicles or buses.”