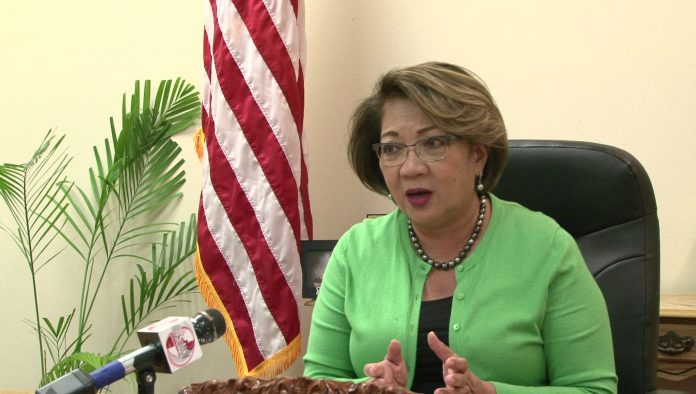 Senator Underwood says she will not be holding an oversight hearing at least until after the Fernandez case is complete.

Guam – Senator Nerissa Underwood is standing her ground, saying she will not be holding an oversight hearing on the Guam Education Board despite what she calls bullying from Governor Eddie Calvo.

Over the weekend the governor’s office sent out a series of press releases questioning who really is calling the shots at the education board.

The governor also continued to demand the resignation of Ken Chargualaf from the Guam Education Board and for Senator Nerissa Underwood to hold an oversight hearing on the board. His entire weekend seemed to focus on the subject, and even his weekly address was dedicated to the reinstatement of Guam Department of Education Superintendent Jon Fernandez.

“Unfortunately, I have yet to receive Ken Chargualaf’s letter of resignation. And that’s disappointing because he is now hindering efforts to fix the problem that he, Lou San Nicolas, Rosie Tainatongo and Nerissa Underwood created,” said Calvo.

The governor has gone on the record stating that he believes Underwood is at the center of a conspiracy to remove Fernandez from the picture so as to eliminate him as a contender in the 2018 gubernatorial election. Others involved in the conspiracy, the governor has said, are Atty. Gary Gumataotao, who led the investigation on Fernandez, and Gumataotao’s assistant, Bernandette Stern Meno.

“I’ve been in the government long enough to know that something very fishy is going on right now. Meanwhile, the board members hide behind their legal counsel. And this attorney, says he would sue anyone who leaks the report, which by the way was supposed to be based on an investigation into one allegation but ends up roping in all sorts of other issues according to those in the know,” Calvo lamented.

Despite repeated calls for an oversight hearing and the scathing remarks about Sen. Underwood’s involvement in the alleged conspiracy, Senator Underwood says she will not be holding an oversight hearing. She also says the governor’s actions are akin to the very bullying that Fernandez and the board had first engaged in with the 18-year-old JP Torres student who accused Fernandez of sexual harassment.

“The complaint was made in May but the board did not act on it until July [which] implies that they had already violated Title IX. But that wasn’t the only thing, it was that in the beginning what the board did was they supported allegations of extortion against the student and a group of adults,” explained Underwood. “For the governor to continue to demand that we hold an oversight after we had made clear our stance regarding this is just really tantamount to bullying.”

And if it wasn’t clear before, Senator Underwood is making it clear now that she will not hold the oversight hearing the governor wants. At least, she says, not until after due process on Fernandez’s case is completed.

“I will not conduct an oversight hearing at this point. And then we just need to see what the results are and I need to take a look at whether the procedures that were followed all throughout were are appropriate and whether they may raise some questions. But I can’t do that until it’s complete,” she asserted.

You can read the governor’s full text for his weekly address below:

Hafa Adai my friends and family,

This past week has been a roller coaster of emotions for our community. We have watched the Guam Education Board terminate the best superintendent we’ve had in years; only to later say that he was not terminated.

Yet he is no longer the superintendent and can’t go back to leading the Department of Education. But the Board has determined that he would be getting a paycheck.

I’ve been in the government long enough to know something fishy is going on right now.

Meanwhile, the board members hide behind their legal counsel. And this attorney, says he would sue anyone who leaks the report, which by the way was supposed to be based on an investigation into one allegation but ends up roping in all sorts of other issues according to those in the know. It’s interesting because the only people who are supposed to have this report are the board members, the attorney and his employees.

According to Ken Chargualaf, he was willing to share that information with me at a meeting. But then he texted my staff, cancelling the meeting based on advice from Gary Gumataotao. Furthermore, any questions we have would have to go through this attorney.

This lack of transparency and persistence that they made the right decision and are now going through a “process” is just ridiculous. Its double talk and back tracking.

That’s why I called for the resignations of three board members – those whom I had appointed: Ken Chargualaf was one of them, Charlene Concepcion and Ryan Torres were the other two.

I have received the resignation letters from Charlene and Ryan. And I want to thank them for doing the honorable thing. Public service isn’t easy and I know they tried. But in stepping down, they contribute to the effort of righting the wrongs and starting the process of stabilizing the education department.

I have yet to receive Ken Chargualaf’s letter of resignation. And that’s disappointing because he is now hindering efforts to fix the problem that he, Lou San Nicolas, Rosie Tainatongo and Nerissa Underwood created.

I met with some students who are advocating for Jon Fernandez’s return. Bonie Nachuo, Tia Nenter, Dorleen Songeni, Neriah Quinata, Shayla Quichocho and Jade Quichocho asked to meet with me to share their concerns.

The one thing they wanted to ensure I did for them is to let the powers that be and the public know:

1. Jon is a great superintendent who really cared about them and wanted to hear their voice

2. And that they want the board to reinstate Jon.

They recognized that Jon was not given the opportunity to defend himself.

It’s amazing because they have rallied with others who share their sentiments and together they held a protest rally, calling on the adults of their community to do the right thing. Hundreds of students from various high schools: JFK, Simon Sanchez, George Washington, Okkodo, Tiyan and I think even a few came down from Southern High school … They came together to cry foul.

And by the way I am so proud of them for voicing their thoughts and speaking out against the wrong they have seen done – not just to Jon but to their school system. They are taking ownership of their school system and their community in a way that inspires me.

I hope others, particularly those at the legislature, are similarly inspired to do the right thing. Hold an oversight hearing, let’s shine light on the darkness so we can move forward!

That’s my pledge to those students with whom I stood on Friday: I hear your voice. I will do the right thing and let us all come together and make things right.

Thank you and God Bless all the people of Guam.