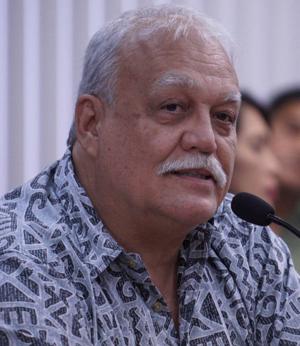 A Republican Senatorial Candidate was recently arrested – for attending what he says is an open meeting for the public.

Reporting on the arrest is PNC’s Don Sulat

Senatorial Candidate, Joaquin “Ken” Leon Guerrero said, “Call the police. Go ahead and call the police. I’m sitting here, I’m about to be arrested because I’m here at a public meeting that was not properly noticed, I’ve been advised by the legal council that I’m not welcomed in this meeting. Where billions of dollars of taxpayers’ funds are going to be decided to spend.”

In a social media post, the Senatorial Candidate claimed that the meeting should be open to the public, arguing that the agenda was a discussion between GMH staff, and the Leon Guerrero – Tenorio administration on funds centered around Governor Lou Leon Guerrero’s One Stop Medical Complex.

He said, “Here I am at the Hyatt Ballroom, where the super secret GMH strategy planning meeting is taking place. And in this meeting, I hope to find out how Guam Memorial Hospital and the Leon Guerrero – Tenorio administration want to spend $2-$3B of tax payer money. That’s $2-3B to build a building, that won’t really improve the quality of life here on Guam, compared to spending $300M the existing Guam Memorial Hospital and a lot of other things that need fixing.”

Although Leon Guerrero argues that GMH was conducting an open meeting, which by Guam law, must be streamed to the public, as well as the public having proper notice by the Government agency.

In a statement to PNC, GMH Spokesperson Cindy Hanson, says that the meeting was a closed one. Saying that it was a training workshop, with the intention to help GMH formulate methods to create a strategic plan.

Luther says that due to the large number of GMH employees attending the event, they decided to have it at the Hyatt.

Employees were notified via email of the meeting, but within the mass email they did not use the words “closed meeting.”

Rather, GMH was under the assumption that it was a meeting just for their employees.

Luther adds that the meeting was held at the Hyatt, due to the sheer number of participants that would attend.

Moreover, Luther says that prior to him asking Leon Guerrero to leave, he consulted with other personal as well as GMH’s Director to ensure that they were not conducting a government meeting.

To which they said, nothing was done that stipulated a meeting, such as having a quorum, nor was there enough board of trustees members there to accidentally start a quorum, or voting process.

The meeting, according to Luther, was how GMH employees can better their services in the current physical hospital, not a proposed future building.

He was booked and release, and the case has been forwarded to the Attorney General for prosecution.

Reporting for the Pacific News Center.