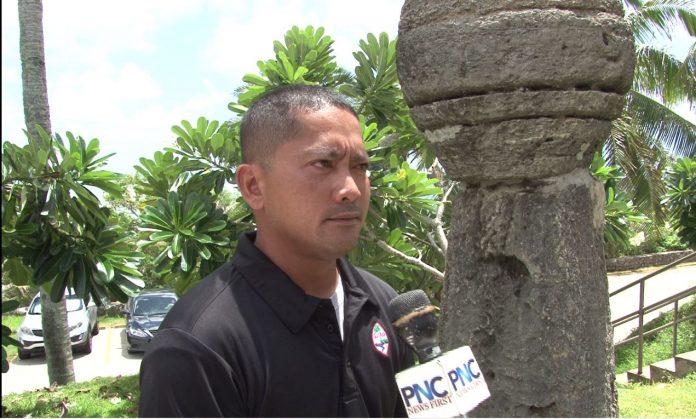 Guam – Senatorial candidate Ned Pablo has called upon all indigenous Chamorros and those who call Guam home to protest the military construction taking place in the NCS area.

Pablo has dedicated himself to standing outside a proposed military construction site in the NCS area on a scheduled basis, five days a week, as he hopes to halt the construction process or to at least raise awareness and ignite a movement that will call for the renegotiation of a contract between the military and indigenous peoples.

Pablo has provided PNC with pictures he has personally taken that show what he says is the destruction of natural resources.

He says that a stop to the construction will ensure safety for future generations of Chamorros and Guam residents alike.

Citing the lack of a guarantee that Section 30 funding will subsidize health care, social and youth services, Pablo says that a realignment is no longer worth it.

Speaking on the Chamorro Land Trust, Pablo wants to see homes built for the indigenous peoples.

He continues to advocate for the returning of land to the original owners, asking for compensation of the land that was taken, and demands that elders are given their war reparations.

“If you guys go there, anyone at least, if you don’t want to protest just go there and look at the devastation that’s going on. And you know…shame on you, you capitalist hyenas, self-interest hidden agenda career politicians, Governor, Delegate and Senators (speaking in Chamorro)…Si Yu’us Ma’ase,” said Pablo.

Those who are interested in joining Ned Pablo’s protest can meet him near the Potts Junction before Machanao and the old golf course in NCS on Wednesdays, Thursdays and Fridays at 5:00 p.m. and Saturdays and Sundays at 1:00 p.m.