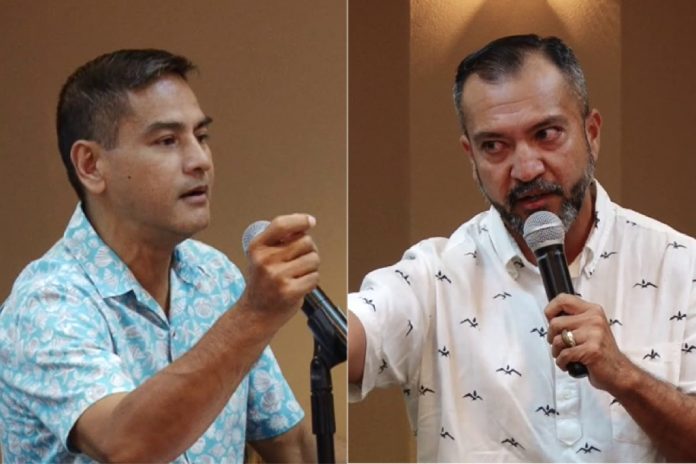 Guam- The Association of Government Accountants welcomed first-time political candidates to the floor during their luncheon today where a spat erupted over the combustible topic of Compact Migrants.

A total of 11 candidates showed up, 10 of whom are seeking a seat in the 35th Guam Legislature and one for the nonpartisan Attorney General seat. Candidates were given five minutes each to introduce themselves to the room full of government accountants and talk about their platforms.

On the Democratic ticket, Lasia Casil said she’s an advocate for equality for all, Democrat Jack Hattig focused on fiscal accountability, Democrat Celestin Babauta focused on vocational education, Democrat Amanda Shelton shared her extensive background in public and community services, Republican Jenei Aguon said her strength is in her drive to help Guam families, Democrat Dr. Kelly Marsh Taitano spoke about her background in cultural preservation, Republican James Moylan focused on helping the small business community, Democrat Sabina Perez introduced her background in successful activism in the community, and finally, AG candidate Leevin Camacho said he would focus on reforming and reorganizing the Office of the Attorney General.

The forum quickly turned into a debate when one candidate proposed a moratorium on the Compact of Free Association. Harold Cruz, a known activist in the community who has been vocal against the federal government—so much so that he was even arrested for protesting in front of the Andersen Air Force Base gates—says until the federal government can get their act together, compact migrants should not be allowed to enter Guam.

Compact Migrants are citizens from the Freely Associated States, to include the Federated States of Micronesia, Marhsall Islands and Palau who migrate to U.S. soil.

“I am calling for a moratorium on the COFA treaty because [of] the economic and cultural crisis that is happening on Guam,” he says, also claiming the Guam Memorial Hospital is owed $109 million in reimbursements for Compact migrants who seek services at the hospital.

“Do you know that 25 percent of the kids that are enrolled in the Guam Public School System are from the [FAS] islands? And it’s put a drain in our school system and the federal government is not reimbursing us the money that is owed to us,” he added. “In 2016 there were 4,217 people arrested on Guam, 1,297 of them were citizens from FAS–38 percent–and they make up 17 percent of our population and I blame the U.S. Congress for not implementing programs that will vet the immigrants coming into Guam.”

Cruz then concluded his speech by pointing out that fellow candidate Clynt Ridgell has roots in the FAS and suggested that “he could help with that.”

“Thank God we have a guy like Clynt Ridgell whose roots go back to the FAS,” Cruz said as he turned to Ridgell for confirmation. Ridgell acknowledged Cruz by telling him he has roots in Chuuk.

Ridgell, a former political journalist for PNC, is of Caucasian descent on his father’s side and half Chuukese from his mother’s side.

“I was gonna come up here and talk about some other things but Harold talked about COFA migrants and that situation and I felt I had to say some things to counter some of the rhetoric that he was spewing,” began Ridgell as he took the podium.

“So one of the issues I have with what he was talking about was this idea that COFA migrants are the reason for Guam’s financial troubles which I believe is 100 percent false,” he said. “I grew up here before there were very many COFA migrants at all on Guam. I remember as a kid, my father worked for Guam Community College in the government and he would talk about how almost every other month there were threats of a pay-less payday. This is before COFA migrants came here, we had threats of pay-less paydays.”

“So to point the finger at one group of people and lay all the blame on one group of people I think is scapegoating. I think it’s wrong and it does nothing to actually address the real problems of the government of Guam, problems that we’ve had for decades before COFA migrants began coming over,” he said.

He then challenged Cruz’s claim that Guam is owed a billion dollars in reimbursements for COFA migrants.

Ridgell, however, acknowledges that there are issues within the COFA community.

“That being said I do admit there are social issues within the community of Compact migrants, obviously. Every new immigrant that moves into any country faces the same issues. In the U.S. they used to hate the Irish at first, then they hated the Germans because of World War 1, they called them ‘krauts’. They hated the Polish, hence ‘pollock jokes’. Now they hate Mexicans and other latinos that are coming in,” he argued.