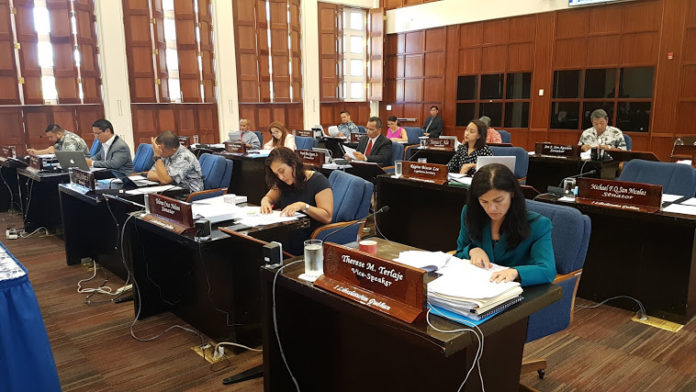 Guam – The legislature spent most of the day discussing bill 204 which would hand over the procurement of the construction of Simon Sanchez High School to the Guam Department of Education.

After years of failed procurement attempts and procurement protests senators are now considering a bill that would take the procurement of a contract to reconstruct Simon Sanchez away from the Department of Public Works and instead give this to the Guam Department of Education.

Senator Mike San Nicolas is concerned that GDOE might not have the technical expertise to handle the reconstruction of Simon Sanchez. He used the example of GDOE making a mistake and putting the wrong grade of concrete in their solicitation for bids.

“And that’s how technical this entire process is and then we have a whole school built with the lowest 30 year leaseback payment that we are obligated for with a roof that’s gonna fall in on the kids heads that wer’e not gonna be able to go into because DPW wasn’t involved in the beginning,” said San Nicolas adding, “and doe will turn around and say well we did our best.”

“I think knowing what the hard construction costs would be would definitely raise a red flag. If the hard construction costs are dramatically lower than everybody else’s how are they doing that? Are they going to be using lower psi because it’s cheaper than the harder concrete? You know those kinds of things. Or the soft costs if the soft costs are much higher is somebody getting some kind of lucrative management contract out of this? Is that coming at the expense of maybe more water fountains that could’ve been in the hallways,” said Senator San Nicolas.

“So for all of that to just get stricken through and all we need is for a responsive offeror to respond to the material respects of a solicitation and to have only the Department of Education responsible for creating that solicitation I’m just I’m very concerned that we may not have an outcome as ideal as we would like,” said San Nicolas.

However, GDOE Superintendent John Fernandez made it clear that procurement is something that the school system is very well-versed in. He said they’ve been handling their own procurement for years and procure roughly 50 million dollars’ worth of products and services every year. They have an 8-member procurement department and he says they’ve had both local and federal procurement training.

Senator Frank Aguon Jr. pointed out that DPW has failed to procure a new Simon Sanchez for the last seven years.

“And unfortunately, we are still seven years far removed from any progress. So, we’re looking at other options. If you ask me if I have every confidence in the superintendent sitting to my immediate right the answer is absolutely yes. Because he has a direct stake in ensuring that the school facility that the Simon Sanchez Highschool students are being presently educated in needs immediate repair or not upgrade but replacement then who would have the greatest incentive to be able to ensure that this process moves forward,” said Senator Aguon.

Senators continued discussing the bill in the committee of the whole this afternoon. Another concern brought up is that the solicitations could be tailored towards a specific offeror.