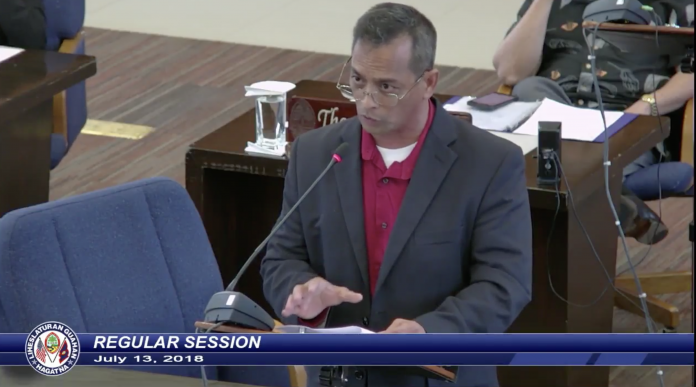 Guam – Speaker BJ Cruz immediately called for session with two hours’ notice to vote on an anticipated override of the governor’s veto of the sales tax repeal. But with objection from Sen. Frank Aguon Jr., session was quickly adjourned with no movement on the bill.

Sen. Aguon questioned the nature of the emergency for session, pointing out that Speaker Cruz did not declare one when he called for session today. In fact, today’s session was not an emergency session, it was called as regular session.

“What is the certified emergency for calling this particular session?” questioned Aguon.

Speaker Cruz told Aguon that session was called under the authority of the speaker with two hours’ notice. But without a declaration of emergency and with no proper notice to the public which would typically require five days, Aguon again pointed out that today’s session may have been called for improperly.

“This body is met on two hours’ notice but if you insist on a written notice for emergency, I will write a written reason for the emergency and call for session after that. Thank you. I guess this session is adjourned,” said Cruz.

Cruz, meantime, tells PNC that he will vote against an override of the governor’s veto of bill 262, a measure to repeal the 2 percent sales tax to plug a $120 million to $160 million financial hole next fiscal year as a result of the federal tax cuts.

During session last month, Cruz was one of four senators to vote against bill 262. The measure passed, however, with a veto-proof vote of 11 to 4.