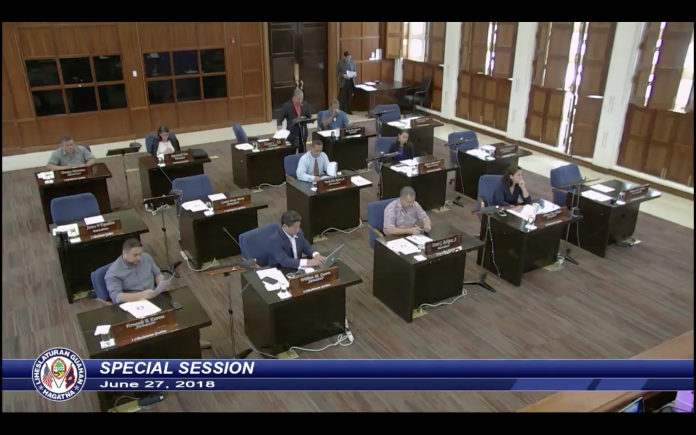 Guam – With only two hours’ notice, Governor Calvo called senators into special session this afternoon to vote on his bill 1-9s that would earmark revenues from a sales tax to address citations in a scathing report against the Guam Memorial Hospital from the Centers for Medicare and Medicaid.

The governor called the legislature into session at 4 p.m., one hour before the Committee on Rules was to meet to go over next week’s legislative session agenda.

Lawmakers convened at 4:20 p.m. for a session that lasted less than 6 minutes long. Senators discussed some housekeeping matters before bill 1-9s was referred to Speaker BJ Cruz’s Committee on Appropriations who then announced that a public hearing must first be held on the measure, scheduled for July 5 at 6 p.m.

“On the motion to adjourn, any objection?” asked Speaker Cruz. “Hearing none, we are adjourned,” he said before he gaveled out of session.

The governor’s measure would clearly outline the purpose for revenues generated from a 2 percent sales tax. The bill would earmark .75 percent of the sales tax to address citations in the CMS report.

Existing law, which senators may vote to repeal as early as next week, meanwhile, would dedicate .75 percent of the 2 percent sales tax to GMH for the purpose of funding operational needs and capital improvement projects at the hospital.

After adjourning special session, lawmakers went on to convene for their scheduled 5 p.m. COR meeting.