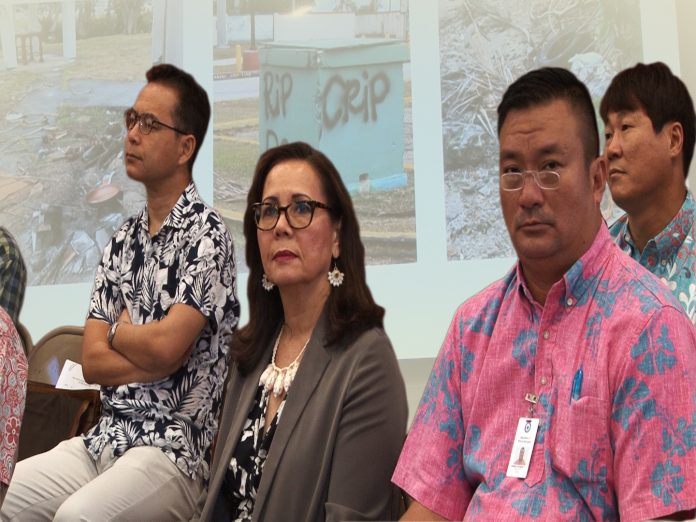 Stakeholders air their concerns over a proposed legislative solution to the challenge of maintaining the island’s public parks during a hearing at the legislature.

The legislature’s committee on environment convened the hearing for Bill 58-35, a measure introduced by Sen. James Moylan.

Also known as the “Public Private Collaboration for the Maintenance of Public Parks Act,” the proposed legislation seeks to allow the Department of Parks and Recreation to partner with private entities for the maintenance of the island’s public parks.

The measure seeks to open opportunities for interested private companies to assist in the maintenance of bathrooms, lights, and other equipment, provide security, and ensure cleanliness.

“Our recommendation is to move toward more of a roundtable discussion, to revisit all options available before any measures are passed or signed into law,” Pilar Laguana, Guam Visitors Bureau president and CEO, said.

Laguana believes the roundtable should include village mayors and that clearly defined rules and penalties must be enforced.

Richard Ybanez, DPR director, identified at least 3 deficiencies in the bill that he believes should be corrected.

Ybanez is concerned that the legislation would lead to the privatization of public parks.

“We believe it relinquishes too much control to a private partner without the commensurate measurable benefit to the government and the public at large,” Ybanez said.

Secondly, he questioned the provision on contract management. He said this will affect DPR’s daily operations and their ability to oversee vendor activities.

“Third, we believe that the proposed tenure term is too long. We suggest that the length of time of the agreement should be dictated by the scope of the agreement and what a reasonable time would be to get a return of investment,”Ybanez said.

Ko said tour agencies had to cancel their tours around certain areas of the island because of the lack of bathroom facilities.

Akihiro Tani, Fisheye Marine Park general manager, said for so many years, public park visitors near Fisheye have been forced to use their private bathroom facilities.

For Moylan, it was vital to seek a solution which wouldn’t further burden the tax payers dollar to improve the standards of Guam’s public parks.

According to information posted by the senator, while DPR has an “Adopt a Park” program, the proposed legislation would allow the private sector to greatly invest on Guam’s public facilities.