Senators have passed Bill 24-36, the legislation that seeks to delay the implementation of the minimum wage increase that was originally scheduled to take effect this March.

The bill was amended to shorten the delay to only six months from the original one-year period proposed by the bill.

Senators passed the amended measure on a vote of 8-6, with one excused absence.

Sen. James Moylan introduced the measure recognizing the impact of the COVID-19 pandemic to local businesses.

The second 50 cent increase is due this year on March 1. This would raise the minimum wage to $9.25 an hour.

The senators passed the bill with an amendment introduced by Senator Amanda Shelton to delay the implementation of the minimum wage by six months instead of one year.

After the vote, Shelton issued the following statement:

“While I still do not support any delay in the minimum wage increase, we should not make our low-wage workers—our frontline workers—wait any longer for this increase that they were promised. I thank my colleagues for supporting this compromise.” 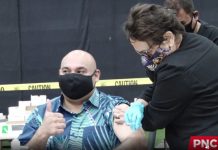