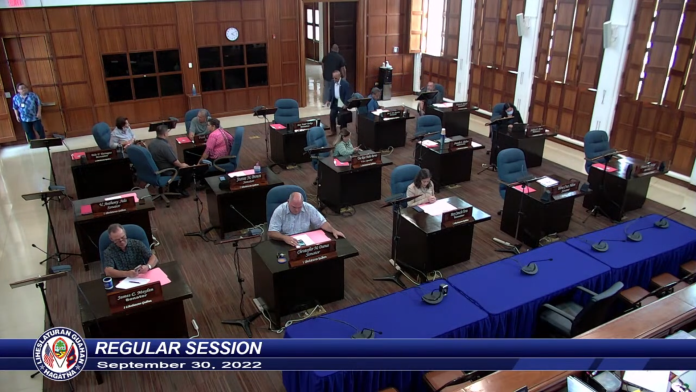 In legislative news – the fight from the legislature continues.

Senators from both sides of the aisle voiced their distaste for the failure to overturn Bill 11-36, which would’ve given the Legislature the ability to end the Public Health Emergency.

Here’s PNC’s Damen Michael with more on this story

Senator Chris Duenas said, ” Once again I rise in the disappointment of the failure to override bill 11 – 36 but I guess I don’t rise in surprise. ”

Bill 11-36 failed to gain the minimum 10 votes required to override the Governor’s veto. The bill, if it had passed, would transfer the Governor’s authority to declare a public health emergency to the Legislature.

In his letter, Tenorio says, “I hope this letter helps clarify the current state of our island’s COVID-19 response, operations that continue to rely on the declaration of a public health emergency, and the compelling reasons the emergency must continue, even as our metrics have improved.”

Senator Duenas responded to the Acting Governor’s letter by saying that the content within it, was a bunch of falsehoods.

Speaker Therese Terlaje spoke out on how the community deserves accountability and transparency.

Terlaje said, ” the challenges that we have faced with the government response during the covid 19 pandemic have made it clear that we need more effective communication and transparency for our community’s benefits which will set up a better system of checks and balances for any legislature or any government during a prolonged state of emergency.. ”

Ultimately, the veto did not get overturned and the power to declare a Public Health Emergency still remains with the Governor.