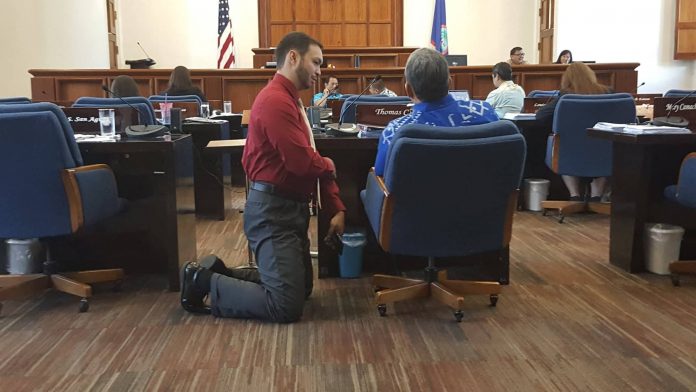 Guam – Senators are now gathering in the Legislative Session Hall at the Guam Congress Building in Hagatna for the final day of emergency session on the General Appropriations Act of Fiscal Year 2019. Now that the budget has been closed, today lawmakers begin the process of engrossing and voting on GovGuam’s Oct.1 to Sept. 30 spending plan.

A final legal review is expected among final steps to making this budget a yea or a nay within the unicameral body, and—barring any major procedural issue—the process of passage or failure is expected to go smoothly. Senators appear poised and ready for action after lunch following a session that carried over far enough into the evening to cancel oversight chairman Sen. Joe San Agustin’s already delayed public hearing on the status of the Dept. of Revenue and Taxation’s collection, enforcement and compliance—in the midst of Adelup’s extension of DRT’s Tax Amnesty Program to collect past due revenues.

No doubt about it, with the Trump Tax Cuts taking their toll, this budget’s been a tough nut for lawmakers to crack. As PNC reported during Thursday’s 5:30 evening newscast, it’s been a long and winding road on the odometer towards passage of the FY19 budget. And, given the pending budget’s reliance on overdue taxes, Gov. Calvo has shown no signs he’s ready to punch down his black rubber stamp.

“It’s something that’s never been done by any legislature, as far as I’m concerned, in the history of Guam process of budgeting,” Calvo told reporters gathered at Adelup for a press conference on Monday.

It’s down to the wire and purportedly never been done before, but can it be done now? As it currently stands, the fiscal year budget is as much as $20 million reliant on past-due taxes, through a midstream budget-repair tool called the Supplemental Appropriations Revenue Fund, AKA ‘the SAR’. This so-called SAR is now propped up to underpin the mission-critical Office of the Governor, Dept. of Revenue and Taxation, and Dept. of Administration, among other government offices.

The next question must be whether revenue collectors can hunt down at least a quarter of the $73 million in unpaid taxes that Rev & Tax Director John Camacho has already classified as collectible, since Gov. Calvo’s Tax Amnesty Program began last spring—and thereby balance the budget. Not over the course of the next fiscal year, and not if it’s reliant on SAR, according to the man who still runs the show.

“You just need to do the math,” the Governor said Monday. “If—and by the way, that’s a big if—moving forward, when you were talking to John (Camacho, Director of Rev & Tax) about $73 million that potentially can be collected, it could happen this year, maybe it’ll take five years. Maybe it’ll take even longer!”

By Thursday the Office of the Governor was still at it.

Since Sen. San Nicolas seems so confident that the SAR will be able to fund a host of departments and offices, the Governor on Wednesday challenged him to fund the Legislature using SAR – the way he’s doing to the Governor’s Office, Department of Administration, and Department of Revenue and Taxation.

Sen. San Nicolas hasn’t responded to the challenge – it’s probably because he knows that to do so would place the Legislature in peril of closing its doors the way DRT and DOA may be forced to close their doors several months into the new fiscal year.

The Calvo Administration also compared its own budgetary trepidation with a quote it attributed to San Agustin in the thick of FY19 budget appropriations debate on Wednesday.

“I understand the intent of the Supplemental Appropriations Revenue when we adjusted the budget, I only ask who has first priority at funds that are collected?  Does Department of Revenue and Taxation?  Department of Education?  As funds are collected under SAR, if DRT doesn’t get the first shot at money … and adequate funds are not collected, we’re going to have reduction in force at DRT.”

PNC showed the quote to San Agustin on Thursday, and he didn’t deny he’d said it. “Where are we at on collectibles? We need to come to terms and the people of Guam need to know, are these collectibles attainable?” he asked.

San Agustin’s Tax Committee hearing was determined to find out at 3:00 p.m. Thursday, but the start of proceedings was delayed till 6:00 p.m., and then canceled altogether Thursday night, due to the ongoing budget session.

Dennis Rodriguez is one of two current Democratic senators now running for Governor. We asked him on Thursday how he’ll handle a budget so reliant on tax debt if he wins election to the headship of the executive branch of government.

PNC: “Can you tell us how you will manage the cash crunch if it comes down to trying to collect what’s uncollectible?”

Sen. Rodriguez: “Yeah, first of all, you know, in principle, I don’t agree with how some of the provisions and amendments have been moved forward. Case in point is this using of the SAR—the SAR Fund. I was actually the one who objected to using that fund, tying it into at least two of the critical engines which [is] DRT and DOA.”

On Thursday Pacific News Center also reached out to Sen. Frank Aguon (D) for his perspective as a senator debating the same budget he’s helping set up for Guam’s next governor. After all, he’s the only other sitting lawmaker running for Adelup. But Aguon was too tied up on the senate floor to offer comment, and his office was disinclined to entertain interview requests on his gubernatorial aspirations during the senatorial budgeting process.

By noon Thursday, senators had broken for lunch. The sixth sense and scuttlebutt seemed to be that once this budget passes the legislative body—if it does—and goes on to the Governor’s desk, the Governor’s probably not going like what he sees. So the legislative majority needs to come up with a consensus to be ready for an override, if it hopes to make the budget hold. If not a Committee of the Whole consensus, then at least a supermajority, to make the FY19 budget veto-proof. But heading into this afternoon’s homestretch to a budget vote, a supermajority is looking less likely, judging from both official and off-the-cuff remarks of the body’s most numbers-engaged senators.

As of Thursday, aspiring congressman and current local senator Michael San Nicolas is hoping to gather enough override steam for the expected veto, and remained adamant that thorough collects on every entity that still owes money to the treasury is the actual solution to funding a government grown over-reliant on easy tax hikes like fuel pump grazes and business privilege levies that increase prices and stick it to Tun Joe and Tan Maria.

“We have a lot of off-island contractors that are earning awards here on Guam for military projects,” San Nicolas said. “Those taxes that they pay on the income from those contracts should be reconciled to Section 30. I don’t think that they are.

“And we passed a bill back in last year that would allow for Rev & Tax to be able to determine if they were. And we’re going to be questioning them about that today in their oversight hearing.” At least San Nicolas and his legislative colleagues were planning to do so until the hearing was canceled.

“But those are the kinds of reconciliations that we should be going after,” San Nicolas said. “Raising taxes on our people because we’re not willing to do the hard work to go after what’s out there is not the answer.”

“But, really, this budget we’re passing here now, whatever budget that’s passed, is really for the next governor,” Rodriguez said. “You know, the next governor will have to make do with what he has.”