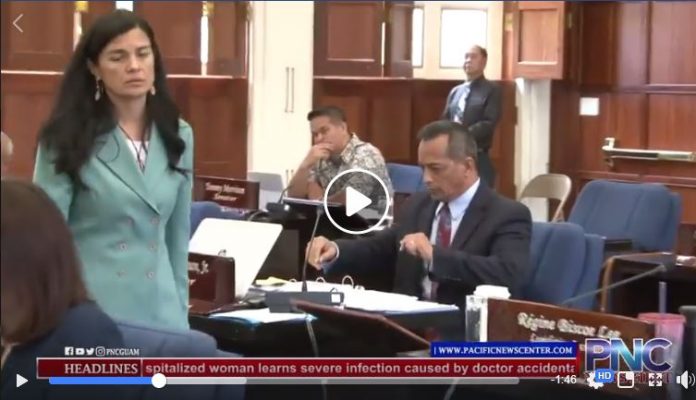 Guam – The amendments are in! Let the slashing begin! With nothing left to lose, outgoing Republican Senator Fernando Esteves shocked the familiar annual budgeting process on Tuesday morning with nearly $24 million in proposed cuts to GovGuam’s FY19 General Appropriations Act. And neither the Governor’s Office nor the Legislature escaped scissors’ reach.

An emergency budgeting session that started the week with a substantial one–year increase in the hotel occupancy tax suddenly found itself wrestling with 21 budget amendments representing $23.7 million in across-the-board cuts by Wednesday. Senators just couldn’t choke it all down at once.

“Mr. Chairman, if she wants to recess, I’m amenable to that,” Esteves told Appropriations Chair and Legislative Speaker BJ Cruz. Vice Speaker (and former legislative counsel) Therese Terlaje was nearly exasperated with fruitless attempts to call for a break in the action long enough to absorb and caucus on Esteves’ packet of budget changes.

“Are we gonna have a recess or not, Mr. Speaker?” Terlaje asked. “It’s a motion, Mr. Speaker.”

“We were supposed to roll up our sleeves and go 12 hours,” the Chairman said.

“That’s correct, Mr. Speaker,” Terlaje said. “Mr. Speaker, when we received these amendments—these are brand new amendments. The first time we saw them was this morning, and there’s a whole stack of them. So I would just ask the respect to allow us to review these to be responsible about what we’re doing.”

“There’s a motion to recess until noon. Eat before then, because we will go from noon until ten tonight,” Cruz said.

So despite the morning headway Cruz had wanted to make by calling for an 8:00 o’clock session that didn’t wind up beginning till 8:45, by 10:15—just 90 minutes into late-starting proceedings—lawmakers were already packing up and rolling out for huddle-ups.

With all senators under Cruz’s orders to right-size the approaching fiscal year, Esteves had delivered a controversial laundry list of budget cuts amounting to the $23.7 million. It should be noted that Esteves is not running for reelection.

After returning from an early lunch, senators got right down to work—stripping the Governor’s Office and Legislature of a million dollars each. But Esteves’s amendments to cut yet more money from Cruz’s already reduced budget allotments for the Office of Attorney General, Unified Judiciary, and Bureau of Budget and Management Research all failed. And so did an amendment to reduce funding for the Office of Public Accountability.

Esteves’s $23.7 million threshold matches the figure senators need to make up after rejecting Cruz’s property tax increase proposal on Monday. Facing election year reluctance to increase any more taxes to meet budget demands, Cruz threw up his arms and ordered cuts. But so far, his “bare-bones budget” is a tough nut to crack.