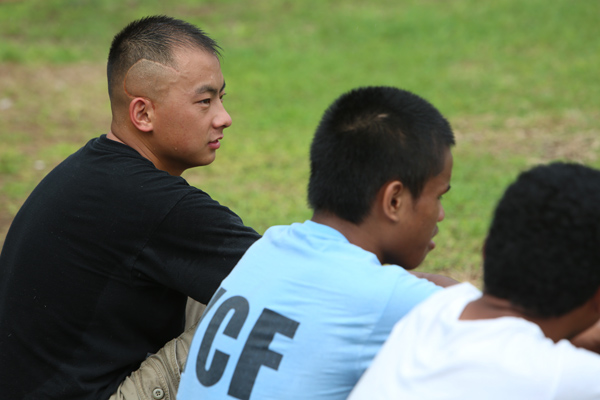 Guam – [DVIDS] – Sgt. Jene Vange talks to teenagers at the Department of Youth Affairs in Mangilao, Guam, Dec. 7. Vange shared his experiences to help relate to the residents of the facility.

MANGILAO, Guam – Service members spent their Saturday in a building surrounded by barbed wire inspiring juveniles who made the wrong decision to make the right choices for the rest of their lives.

“The Department of Youth Affairs is a place where juveniles are sent when they commit crimes and are given a second chance,” said Navy Lt. Travis E. Coffey, deputy chaplain for MAG-12, 1st Marine Air Wing, III Marine Expeditionary Force. “This is their chance to turn their lives around.”

[ Sgt. Jene Vange talks to teenagers at the Department of Youth Affairs in Mangilao, Guam, Dec. 7. Vange shared his experiences to help relate to the residents of the facility. The service members are participating in Exercise Forager Fury II. FF II is the series of exercises which Marine Aircraft Group 12 is conducting in the Mariana Islands focus on refining core skills within the squadrons and MAG. This, in turn prepares them to function as an integrated air unit able to perform a wide range of missions. Vange is a logistics and embarkation specialist with Marine Wing Support Squadron 171, MAG-12, 1st Marine Aircraft Wing, III Marine Expeditionary Unit. (U.S. Marine Corps photo by Lance Cpl. Alissa Schuning)]

Service members interacted with the teenagers and shared stories and advice during their visit.

“We have a lot of Marines and sailors that are able to relate to the people that are there,” said Coffey. “They shared with the children the bad decisions they have made and how they overcame the difficulties in their life to get to where they are today.”

As the day went on, the teenagers became increasingly more comfortable and were eager to ask questions about the military and some even showed an interest in joining as a way to change their lives.

“I think each one of these kids has a bright future,” said Lance Cpl. Thomas Taylor, F/A-18C air frames mechanic with Marine Fighter Attack Squadron 232, Marine Aircraft Group 11 currently assigned to MAG-12, 1st MAW, III MEF, under the unit deployment program. “They just have to be willing to work for it.”

The demeanor of the teenagers had drastically changed as the day ended and the service members began to leave.

“I think it made a difference that we showed that we cared,” said Coffey. “I explained to them that the people here did this on their day off of work because they wanted to be here and once they saw that I think they were uplifted.

“As I was leaving, multiple residents came over to say ‘Thanks’ and that proved to me that the time we invested was meaningful.”