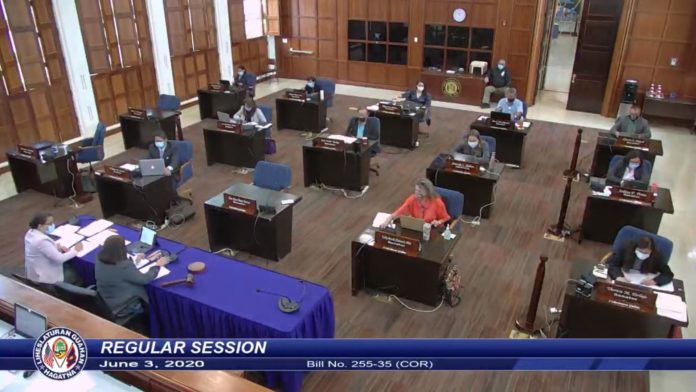 On day 3 of the current session, Guam lawmakers advanced to the voting file a bill introduced by Sen. Mary Torres that would provide lease protections for tenants who are victims of family violence.

However, Bill 255, the controversial health insurance choice bill for GovGuam employees, was set aside after a day of debate.  It was introduced by Senator Pedo Terlaje and Speaker Tina Muna Barnes.

Senator Jim Moylan’s Bill 71, seeking to increase the size and weight limits for tractor-trailers on Guam’s roads, also failed to advance to the voting file.

Debated and Moved to the Voting File:

1. Bill No. 255-35 (COR) As amended by the Committee on Public Accountability, Human Resources, and the Guam Buildup. – Jose “Pedo” Terlaje, Tina Rose Muña Barnes
AN ACT TO AMEND REPEAL AND REENACT §§ 4301(a) AND §4302(c)(29), BOTH OF ARTICLE 3, CHAPTER 4, TITLE 4, GUAM CODE ANNOTATED, RELATIVE TO ALLOWING CHOICE FOR SUBSCRIBERS THAT PARTICIPATE IN THE GOVERNMENT OF GUAM HEALTH INSURANCE CONTRACT. *Bill set aside – 6.3.20

In the Voting File: