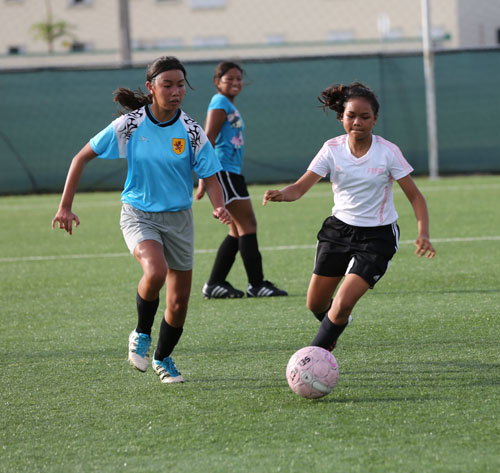 After Guam Shipyard fell behind 0-1 in the first half, visiting player Reyn Johnson leveled the match in the 63rd minute with a beautiful header for goal that stunned the Espada defense. Twenty minutes later, Guam Shipyard earned a scoring opportunity after a six-second rule violation was called on the Espada keeper. Shipyard’s Ajay Pothen sent the ball to teammate Donald Weakley, who finished the shot for the eventual game winner.

In other Division I matches, Quality Distributors FC defeated the Paintco Strykers 6-4 to stay in third place in the standings. The Strykers outscored Quality 3-2 in the second half, but it wasn’t enough to overcome a 4-1 deficit from the first half. Quality’s Scott Leon Guerrero led all scorers with a hat trick and teammate Phillip Ogo scored twice in the contest. Jan-Willem Staman scored Quality’s other goal. Derek Bender, Philip Au, Michael “Jake” Benito and Jeffrey Ho scored for the Strykers.

Xtra Krispy FC picked up its first win of the season with a 4-2 victory over FC Shotguns. Ryoma Fukuyama led the winning team with two goals and teammate Se Rah Lee scored once. Xtra Krispy’s other goal came on a Shotguns own goal in the first half. Jordan Jasmin and Cyle Tass scored for the Shotguns. 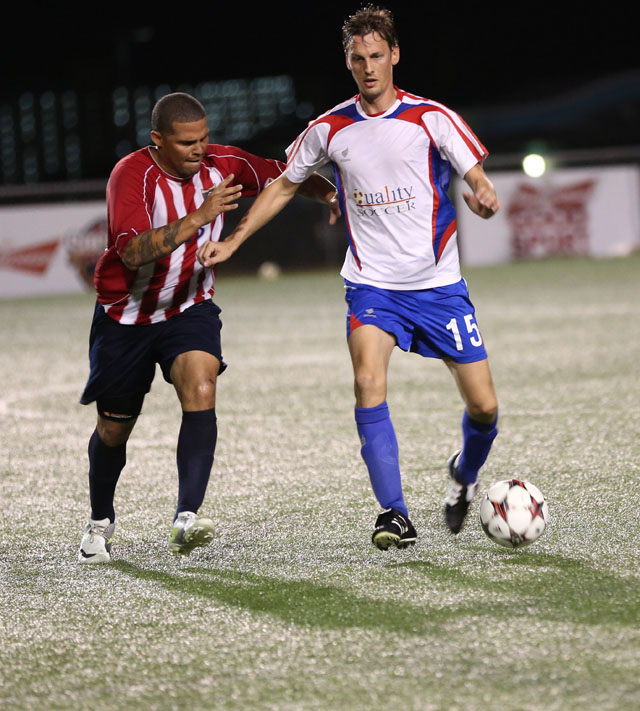 [Quality Distributors’ Jan-Willem Staman keeps the Paintco Strykers’ Jonathan Archibald away from the ball as he carries it up the midfield in a Week 9 Division I match of the Budweiser Soccer League at the Guam Football Association National Training Center. Quality Distributors defeated the Strykers 6-4]

In the Masters Division, IT&E/IP&E picked up its second win in as many games in 2014 with a 2-0 victory Big Blue. Matthew Elwell scored both of IT&E/IP&E’s goals.

Hyundai Family FC shut out the Rovers Masters 2-0. Byung Choi and Chul Park scored one each for Hyundai. 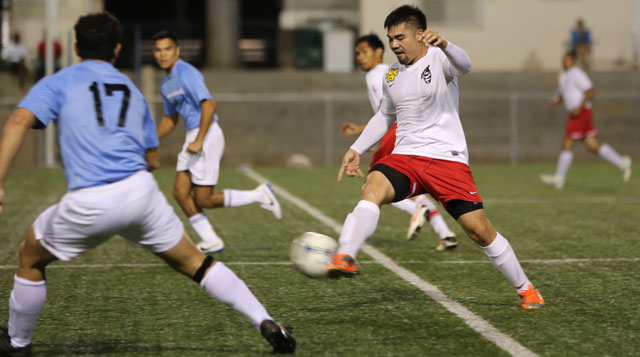