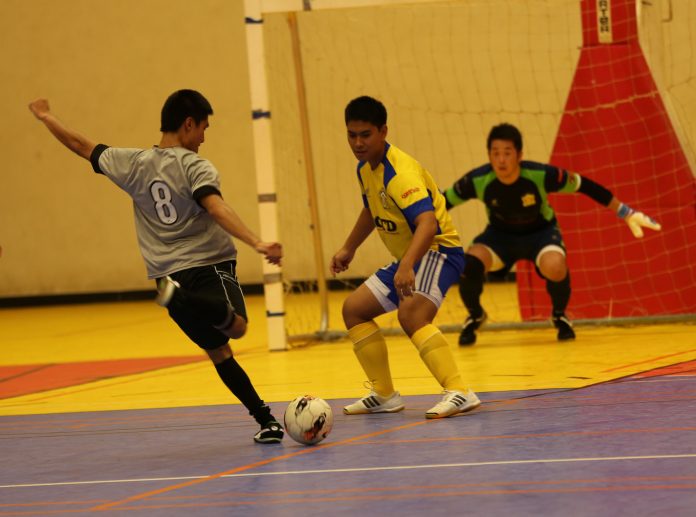 Harmon, Guam – A new champion will be crowned in this year’s Docomo Pacific Men’s Futsal League Sunday at the Guam Sports Complex Gym.

Defending champion Quality Distributors FC fell to No. 1 Guam Shipyard 8-3 in the first semifinal match of the league playoffs. Shipyard held on to a 1-0 lead for most of the first half until a Jimmy Bush goal leveled the match with a little more than five minutes left on the clock. The 1-1 score was short-lived as 20 seconds later, Shipyard regained the lead and pulled away for good with a goal each from Vinicius Rodrigues and Ian Mariano before the halftime buzzer. Shipyard continued to extend its lead in the deciding half, outscoring the league’s defending champion 5-2 to move on to the championship game.

[Photo: The Southern Cobras’ Jan Flores (8) attempts a shot against the Rovers FC during a semifinal match of the Docomo Pacific Men’s Futsal League at the Guam Sports Complex Gym. The Rovers defeated the Cobras 9-6.]

Shipyard will meet the Rovers FC for the championship title after the No. 2 team punched its ticket to the finals with a 9-6 win over the Southern Cobras.

The Cobras started off as the aggressor in the match, knocking in the match’s first goal off an Eddie Lee Lorenzo close-range shot in the third minute. The Cobras accidentally put the Rovers on the scoreboard three minutes later on an own goal, but managed to pull away with a trio of goals by the 15th minute of play.

A minute later, the Rovers began to chip away at the Cobras’ 4-1 advantage, with Kyle Legozzie scoring a goal almost every minute to level the match at 4-4. After a Natsuki Recella goal with less than five minutes left in the half gave the Rovers the lead, the winning team never looked back. Moments later, a Cobras defensive header unfortunately resulted in an own goal, giving the Rovers a 6-4 advantage by halftime.

The Cobras will next face Quality at 2 p.m. Sunday in a match to determine the third-place team. The championship match between Shipyard and the Rovers will kick off at 4 p.m. the same afternoon. A short awards ceremony will be held after the championship game with awards presented by Docomo Pacific.