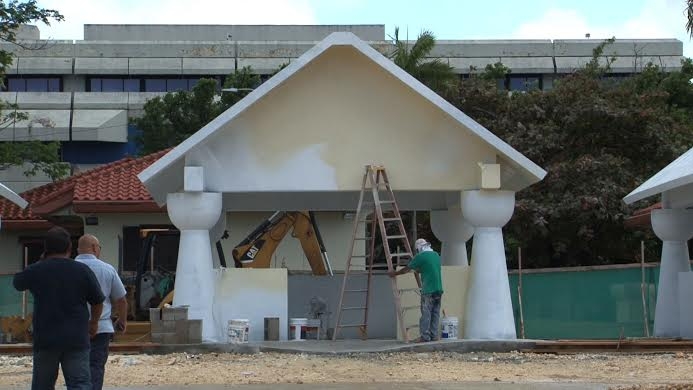 “Can you imagine if they had asked us to come out here and build these huts how many of our people how much of our island would come out and put together for this festival?” – Cultural Practicioner.

Guam – In preparation for FESTPAC GovGuam is constructing 34 cement huts at the Paseo in what was part of the Chamorro village parking lot. However not everyone thinks this is such a good idea.

A local cultural practitioner who wanted to remain anonymous for fear of retribution spoke to PNC today(Tues.) about why he feels the concrete huts that are being built for the Festival of the Pacific Arts are not a good idea. “I would not call it huts that is not a hut that is a concrete structure,” said the cultural practitioner

GovGuam is spending $1.9 million dollars to build 34 of these concrete structures. “That’s a lot of money wasted on materials that can be used on other stuff like repairing our roads our highways that actually do need construction, schools that actually do need a lot of attention with textbooks, food trays and many more other necessities the schools need that has yet to be taken care of.”

The local cultural practitioner would’ve like to have seen huts built out of native materials like wood and thatch. The way they were traditionally built. “I don’t believe that this is a traditional practice Festival of Pacific Arts is a practice of cultural arts.”

He says that GovGuam should’ve brought together some of the island’s cultural practitioners to build the huts from traditional materials in order to perpetuate the culture and pass the knowledge down to the younger generation. “Chamorro village na lastima Chamorro village and then you have all these stuff. Let’s practice the traditional ways. Let’s promote the culture in any way that we can through what our natural resources gives us and through our traditional way of life and practices.”

Although the huts are made of cement the traditional thatch or Nipa leaves are being added to their rooftops. “Now that there is what I call a waste of time. If you’re gonna go out and pick nipa leave to cover the roofing to make it look like natural huts you might as well have just did natural huts period,” said the cultural practitioner adding, “Can you imagine if they had asked us to come out here and build these huts how many of our people how much of our island would come out and put together for this festival?”

Governor’s Spokeswoman Oyoal Ngiririkl says the decision to make cement huts came down to two major reasons. One reason is to create a permanent improvement to the Chamorro village and Hagatna as a whole and the other reason is to ensure that something was built and finished on time for FESTPAC. “We really wanted to ensure that whatever was being built whatever money was being spent would also go into improving our facilities,” said Ngiririkl adding,

The Governor’s Spokeswoman is confident that Guam will be ready for FESTPAC come May 22nd. “SPC has been very pleased so far with the more recent visits they’ve made. seeing the progress that’s made to ensure that everything is in place and ready to go for FESTPAC 2016.”