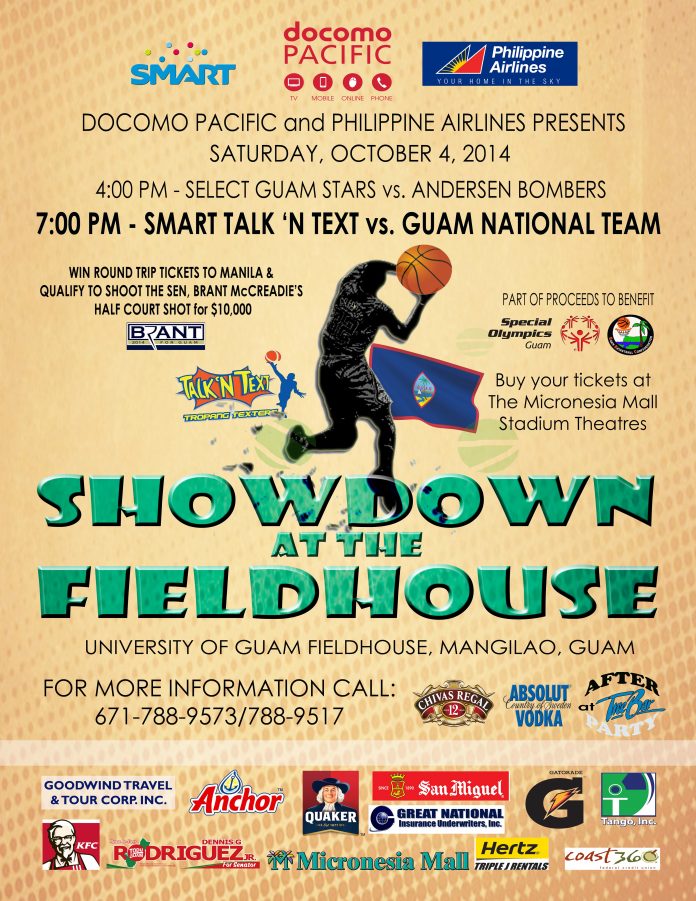 GUAM – PRESS RELEASE – On October 4, 2014 – Docomo Pacific and Philippines Airlines will bring in a live basketball exhibition game at the UOG Fieldhouse – dubbed “Showdown at the Fieldhouse.”  The scheduled main game will  be at 7pm, featuring one of the Philippines’ premier names in basketball, the Smart Talk ‘N Text team playing against the Guam National Team, while the opening game featuring the Guam Select Stars vs. Andersen Bombers will start at 4pm.
Part of the proceeds will benefit two non-profit organizations, the Special Olympics Guam and the Guam Basketball Confederation.   The game will also feature prizes such as roundtrip airfare tickets to Manila and the Sen. Brant McCreadie’s Half Court Shot. Ticket holders get a chance to shoot the basketball from the half court range for $10,000! Entertainment, games and prizes are also planned as former actor and TV host, Mr. Bojo Molina and Guam’s own, Mr. Partick Lujan hosts the games.
Tickets are $25.00 for bleachers and $35.00 courtside and can be purchased at the Micronesia Mall Stadium Theatres.  Group rates are also available, simply call 788-9573 or 788-9517 for more information.
Finally, after the games, get a chance to meet the players!  Absolut Vodka & Chivas Regal is hosting an after party at the Hilton Tree Bar, first round is on them. Just present your event ticket.  Press conference is set to be on October 3rd, Friday, 5pm at the Micronesia Mall Center Court.