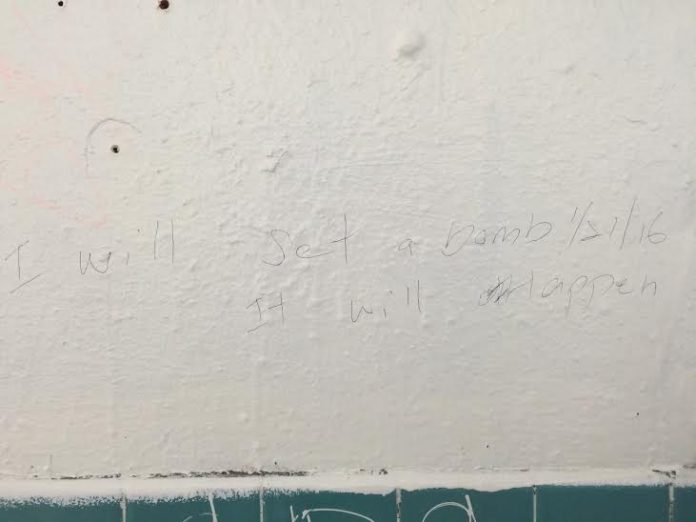 Simon Sanchez High School found another written bomb threat in one of their restrooms, making it the fourth bomb threat the Guam Department of Education received in just a week.

Guam – Safety measures continue at Simon Sanchez High School after another written bomb threat was discovered in a restroom. This time, the bomb threat is scheduled for January 21st.

GDOE Acting Deputy Superintendent Chris Anderson says, “Unfortunately the administration from SSHS received a report from students that again, there was another writing scheduling a bomb threat for Thursday. Not really sure what the situation is scheduling bomb threats but in those two cases, it was a threat of an upcoming bomb threat.”

Because of the recent bomb threats, GDOE is enforcing safety measures at Sanchez. GDOE Acting Deputy Superintendent Chris Anderson says the school is also coordinating with the Guam Police Department.
Anderson explains, “They’re still continuing to do sweeps in the morning and in the afternoon. They’re closing down their campus at 3 o clock. There are some after school activities that are still allowed so in the areas where the campus has to be used by sports teams or any other approved club organization, students will be only allowed in those areas, everything else is off limits.”
Another measure includes a restroom monitor where students have to sign in and sign out if they wish to use the restroom. Andersen says these bomb threats, whether it’s just a prank, are taken seriously not only by GDOE, but GPD as well.
Anderson says, “We want students to be fully aware of the fact that this type of behavior is classified as terroristic conduct. From DOE’s perspective, this type of behavior is subject to suspension and possible expulsion. From GPD’s side, it’s a criminal offense, so students need to understand the full implications of what this means if they’re found responsible for these types of threats.”
Should you have any questions or need additional information, please contact SSHS at 653-2313. Thank you.